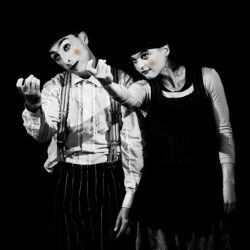 Compagnia Baccalà return to Edinburgh for a welcome encore, after last entrancing the Fringe in 2014. Performers Simone Fassari and Camilla Pessi are a double-act in the mold of Chaplin – and are simply the best mime artists. In their hands, the world is exciting and baffling. An upside-down ladder is a brilliant toy, while an unwillingly shared apple prompts acts of balancing and circus tricks.

Pessi, in particular, is almost irresistibly delightful, approaching the show (and us) with a wide-eyed look of wonder that belies the level of skill she and Fassari bring to their performances. This is a show of comedy-driven feats that beguile rather than strut. There’s no grandstanding here, as the show revels in the escalating potential of small quirks, from endless hugs to how to get down from a trapeze. Everything moves forward as if prompted by a series of small, encouraging taps on the shoulder. It’s a gently heartwarming experience.

The show’s success lies in Fassari and Pessi’s onstage rapport and fluid expressivity, their classically clownish black-ringed eyes constantly opened in surprise. They interact like children, with the same easy directness and confusion. Spending time in their company is often a joy.

Sometimes Pss Pss’s general air of whimsy becomes a little too much, tipping over into being cloying. And the low-key pace won’t be for those seeking flashiness. But this is a gem of a show, abundant with gentle wit and buckets of charm.