Review: After The Cuts by Raw Material Arts 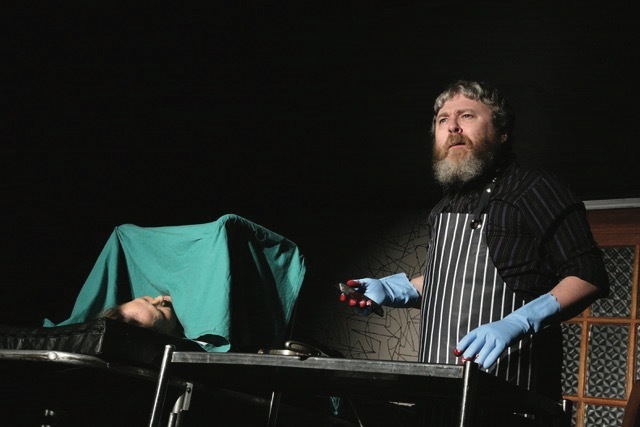 It's 2042. The NHS has been decimated, and in its place a bunch of shysters flog crappy insurance policies. When Aggie (Pauline Knowles) falls horribly ill, inevitably she's not covered and loving husband Jim (George Docherty) takes drastic action. It's a reminder to value the NHS before it gets sold off. It just doesn't come across as a particulary powerful reminder.

Gary McNair's script sits firmly in the tell rather than show camp. It's all spelled out in block capitals and familiar metaphors. The world values money over humanity, we're told, reducing life to a "dot on a spreadsheet". A short debate about whose fault it all is, the politicians or us, is just clunky exposition on both sides.

Tonally, too, this doesn't quite gel. Clearly, it's meant to be darkly funny, and in places it is. But that doesn't forgive it the need to be believable. Principled, down-to-earth Aggie won't countenance the idea of Jim delivering packages for a local spiv to scrape together money. But, slipping into Repo Men mode, she's the first to raise the idea of her husband selling a kidney.

More deftly handled are the hints about the world outside, one of food shortages and backstreet bartering. Early on a Blue Riband bar is whipped out as a nostalgic and expensive black market treat. It seems unlikely, then, that supermarket wine would serve as an available anaesthetic for Jim's intervention – and that's before considering that meticulous Jim's research might have given him doubts about the effectiveness of wine as a general anaesthetic.

The most credible element here is Jim and Aggie's loving relationship. They are given some slightly duff lines—all kitchen sink angst punctuated with comedy swears—but they sell them with care.