Review: All of Me 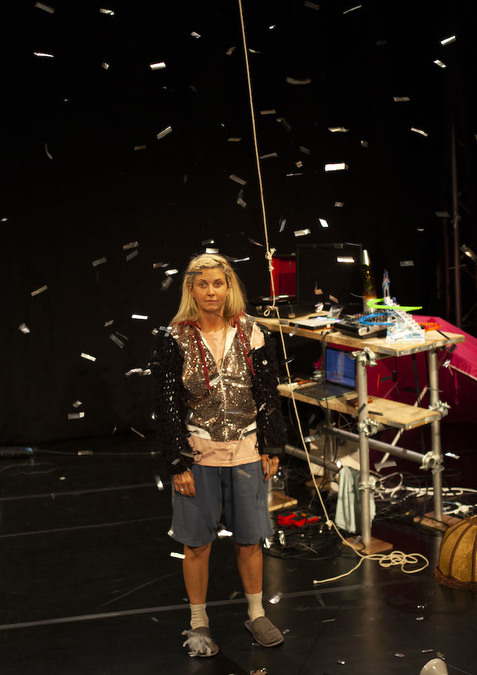 All of Me starts with an avalanche of apologies. Caroline Horton spits her sorries like spite. Sorry this show’s such a wreck, she snarls. Sorry it’s not ground-breaking, or sweetness and light. This show won’t sugarcoat suicidal depression. Horton smirks: Sorry, no refunds.

Four weeks ago, during a deep spell of depression, Horton supposedly junked her entire script and started afresh. “I ruined that show,” she scowls, “FOR YOU.” Instead, she’s made something unrepentant and honest: a mental health show that feels scrawled onto the stage.

Scuffing round the stage bra-less, in shorts and scarecrow hair, Horton starts something, then lets it slip. Songs morph into self-loathing rants. Soothing soundscapes are shot down by sirens and seagulls. This is a show that continually self-sabotages.

Because All of Me isn’t just an evocation of depression: it is, purportedly, a product of it as well – a mess of a show made by a mess of an artist. Frank as that is, it’s also mighty frustrating – at least in the moment. The further I get from its gnarled nihilism, the more I’m coming round.

Hung off a hard-to-grasp myth that drags Horton down into the underworld, it ducks behind the excuses it gets in early on. The more it self-destructs, the more it succeeds. Depression does that, and Horton dares to argue its case, lambasting a broken world that keeps on keeping on – neatly illustrated by a mechanical penguin toy. Glinting in the darkness, clad in a carnivalesque headdress, Horton wonders if she’s at her best at her worst. All of Me gives us both at once.