Cleopatra returns from the dead to record a podcast about truth, lies and science 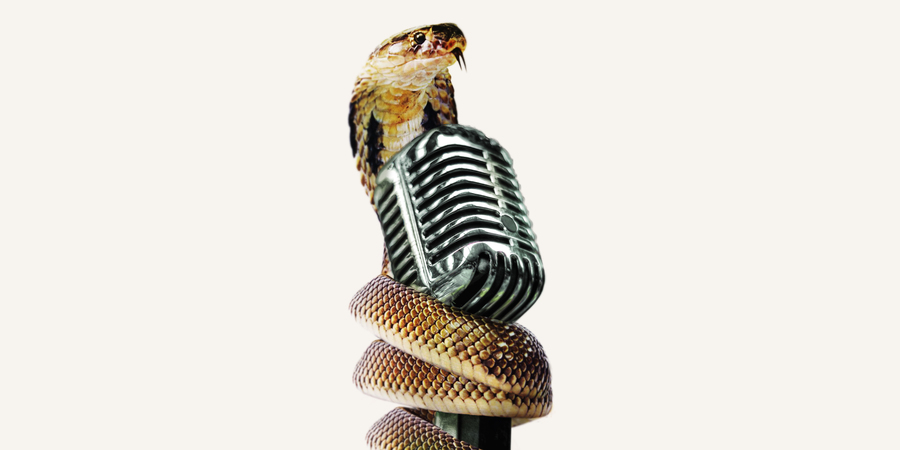 A mic crackles in a quiet studio. Two women are recording a podcast, with a helpful sound technician watching from behind the glass. It would be an unremarkable event, if not for the fact that one of the women is long-dead legendary Pharaoh, Cleopatra.

Her miraculous appearance from beyond the grave is taken as read in this otherwise straight-faced play. Anguis is Olivier-winning actor Sheila Atim’s debut as a playwright, and it layers pointed questions over dodged answers in the thorny dialogue between Cleo (played haughty but human by Paksie Vernon) and her interlocutor/podcast host Kate (Janet Kumah), an expert virologist. On the agenda: discussions of truth, lies, myth and ambition, all circling around the veracity of Cleopatra’s supposed suicide by snakebite. Directed by Lucy Atkinson, the tension in this unlikely meeting is routinely punctured by good-humoured David (Peter Losasso), even though he accidentally hands Cleo a lit fuse in the form of details about Kate’s recent disgrace.

As Kate’s credibility unravels, the audience is caught between her supressed memories and her determination to fight for fair treatment. The lights flicker and distant voices float through the airwaves, but it is difficult to bring real theatricality to a podcast, even a staged one. Anguis feels more like a bottle episode of a prestige TV drama or a rehearsal for a Radio 4 play. The story is intriguing, the issues real and the characters fully formed, but the intellectual pacing doesn’t quite compensate for the way the soundproofed walls cage the action.