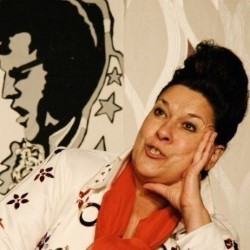 "Are ya lonesome the nicht?" croons Joyce Falconer's Joan, her impressive quiff and bedazzled suit vying with the karaoke system for attention. Morna Young places the King's lyrics within her Doric play, a charming if predictable tale of finding your identity in rock and roll.

As Joan, Falconer walks the line between eccentricity and sympathy, fleshing out Joan's impulsive and accelerative entry to the world of Elvis impersonation without the character arc feeling unbelievable. Her relationships feel genuine throughout, particularly a blossoming chemistry between Joan and DJ "Fat" Bob (David McGowan) which moves them beyond so-so rom-com couple territory. The most comedic their tender connection gets is an extended pun run of song titles – it feels a little out of place but, after all, that's the charm of seeing Elvis in the pubs of Aberdeen.

Each of Joan's tributes plays as a lovingly make-do approximation of the King, but there's a distinct lack of suspense throughout Young's script. Plot points can be spotted from a mile off, making it the kind of show where you mutter "of course" as the inevitable plays out. That said, the emotional wealth doesn't feel undermined by this: Karen Ramsay offers hidden depths as Joan's foul-mouthed mother, no longer played for a one-joke character by the end. If you aren't singing along with Joan's final performance, it'll be out of stubbornness to admit how infectious her joy is.