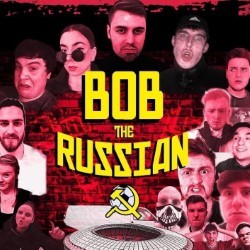 When is a bank heist, not a bank heist? Bob is planning to use the World Cup Final in Moscow as a distraction while he and a bunch of anonymous misfits rob a a local bank. Or is he? With some pretty dodgy accents, a hell of a lot of slow-mo fight scenes and a banging soundtrack, Naughty Corner Productions pack a punch with their absurd show.

Underneath the farce is a story about appalling homophobia in Russia. It’s an interesting choice to pair laugh-out-loud moments with brutal homophobic murders. That’s not to say that you can’t use comedy to explore important issues, but there are times where it feels more like two ideas squashed together than one flowing story. Key premises aren't set up clear enough and early enough, with inevitable confusing consequences. For one moment it looks like the good guy is killing people in the LGBT community, rather than avenging their deaths.

The main cast has many gifted comedic actors. Adam Nicholls’ Lyles Larue, the out-of-work Mancunian magician, is hysterical. With a focus on accent, facial expressions, and timing, it’s simple, well-thought our humour from Naughty Corner Productions. Nicholls delivers it perfectly. With a few tweaks this could make a real statement about the horrific oppression that happens in Russia, but at the moment it’s just pretty damn bizarre.

Have you ever thought about how much Vladimir Putin looks like the late Paul Daniels?