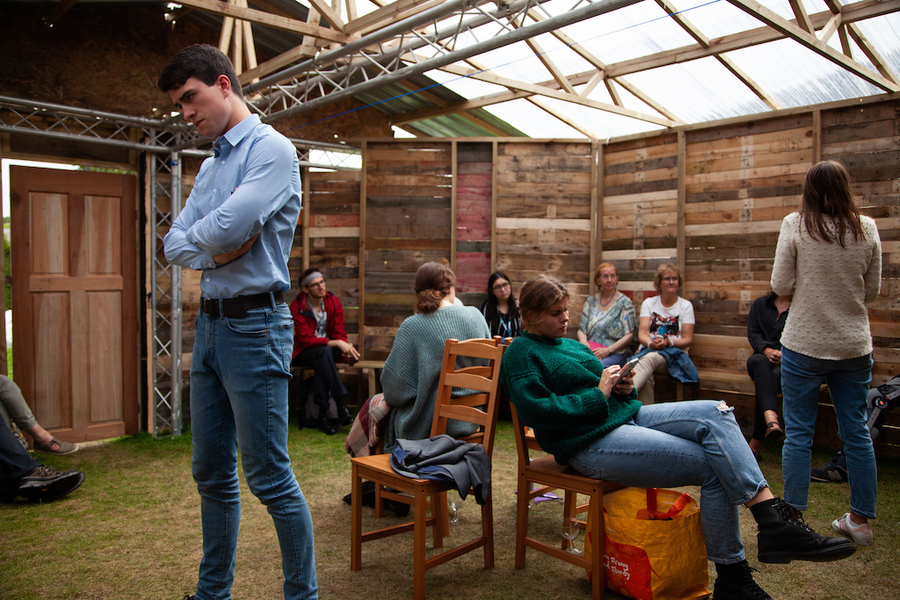 From the Wind
By George Sully
Published 10 Aug 2019

It’s normally considered bad form in a review to make reference to things a show can’t control, like the weather. But BoxedIn Theatre’s From the Wind is not only being performed at The Greenhouse—the festival’s “first and only” zero-waste venue—but also deals explicitly with renewable energy (i.e. wind power). So it seems fitting to at least acknowledge it. And nothing would remind you of both the power and the capriciousness of the elements more than watching a play in a rickety shed during a torrential downpour. Oh, Edinburgh.

From the Wind seeks to demystify the knotty relationship Scotland has with renewable energy, via snatches of verbatim theatre and lecture-style talks. The climate crisis is now impossible to ignore, and yet its intersection with our capitalist economy means the reality of planet-saving measures is muddied by money. Being green often isn’t cheap, or easy, especially for more deprived communities. Corporate powers both facilitate and obstruct renewable projects. It can all feel helpless.

Using recent energy projects on Fair Isle and the Isle of Lewis—and real-life testimonies—as its source material, the play at least bears a core of truthfulness and sincerity. But there’s an unfortunate irony hearing one character confess to “zoning out” whenever such projects’ labyrinthine processes are explained – only to see audience members doing exactly that during this production.

It’s hard to make these topics entertaining, and you could argue that to seek entertainment would be to miss the point. But there are theatrical ambitions here that are simply not met: the acting invokes a school play; the blend of scenes and lectures is only serves to confuse us; and the didactic segments are still dizzyingly dense. From the Wind’s activist aims are noble and vital, but risk being washed out by mediocre performances.