Review: Busking It by Coin Drop 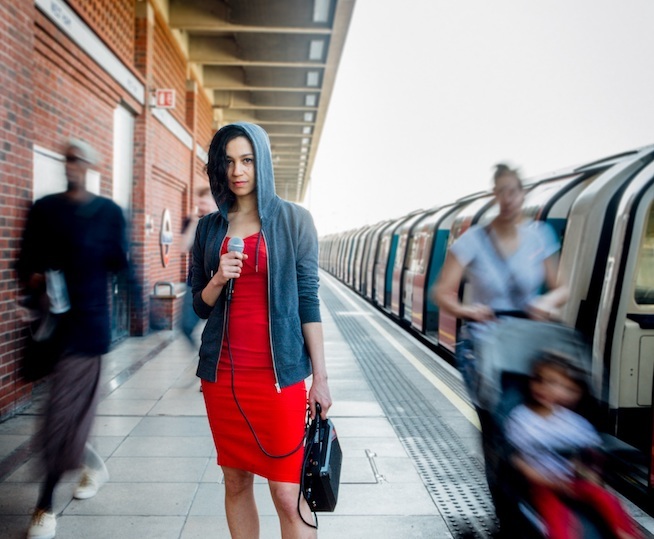 In front of the curl of a Tube tunnel, writer and performer Danusia Samal snatches at moments rushing by. Driving us through commuters who stop long enough for her to digest them, she deftly snaps between their characterful voices: the lost, the stressed, the creepy. In spite of broken relationships, family difficulties and oddities on the Northern Line, there’s something in Samal’s story that is determined that no matter what, a change is going to come.

As a busker for just over a decade, Samal sees how public interaction has changed; our gaze drifting slowly downwards. Over the years, her attitude towards commuters has hardened, building a wall between her and the hecklers. In a story nodding towards magical realism, a high-pitched fairy godmother steals her microphone one day and forces her to reevaluate.

The story plods along nicely enough, with an arc that’s a little too obvious from the start, but Samal is such an engaging performer that we stick with it. There are threads of darker stuff in her sort-of-dad’s story (he's not been granted leave to remain) but enough not to ruin the mood: he’s used as a tool for nostalgia and, of course, song.

Along with musicians Adam Cross and Joe Archer, Samal dots the story with lilting tales of love, anger and uncertainty. The instruments they pass to and fro are strewn at their feet, alongside cups of change. Samal’s voice is silky, moulding around the vowels and pulling notes back with control. The smile she sings with nods at the joy she gets from doing this. It’s infectious.

Buskers measure their worth by what other people think of them, but Samal teaches us that we are more than how much money people throw at our feet.