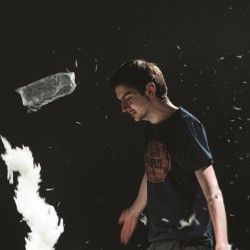 Think that having obsessive compulsive disorder (OCD) simply means washing your hands over and over again? Can’t Stop Can’t Stop will make you think again.

Sitting on—or pacing around—a stool in the centre of a downstairs studio space in C royale, Sam Ross takes us inside the head of someone who lives with OCD. He talks through his compulsions and his anxieties and shows us his triggers.

What is immediately clear is that the experience of OCD is hugely individual, tailored by—recent science suggests—faulty flight-or-fight mechanisms in the brain. Ross’s use of flashing lights and bursts of deafening sound skilfully evoke the frightening mental overload of an OCD episode.

The strongest aspect of this production is how visceral it is. Ross fearlessly portrays the psychological and physical impact of his OCD and the patterns of behaviour it locks him into. This isn’t neatly internalised or a matter of a few tears spilled; it’s gagging, contorted, on the floor, covered in your own spit.

It’s difficult to watch at times, and importantly so. It lends an acute urgency to the interspersed scenes of Ross undergoing the painfully slow process of trying to make an NHS appointment with a therapist. It brings home the daily, desperate battle that living with OCD represents.

Beyond this, the show is a little rough and ready; the metatheatrical elements, including some stilted audience interaction, aren’t as clear or as well integrated as they could be. But it’s still very early days at the Fringe for Can’t Stop Can’t Stop, which is already a powerful, illuminating hour.