A riotous clowning comedy for little ones that makes adults giggle as much as children. 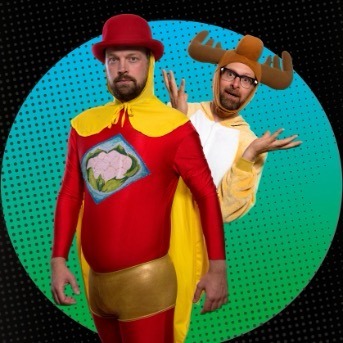 Children are giggling mere seconds in, as Dan Lees snuggles up with his toy moose Marvin. As he’s drifting off, Marvin (Neil Frost) appears from behind a screen, larger-than-life and ready to cause some havoc.

The comedy duo are inventive with their mimed humour, using a bin lid for a space suit and inviting the audience into a sing-a-long scat. As Captain Cauliflower fights a dragon, dances with a shark and zooms off into space, we’re sprayed with bubbles and splattered with water. An evil villain jumps on the scene to steal his magic hat and they race around the theatre, united, like all good panto performers, by the inability to look behind them. Pouring with energy and underscored with music from classic movies–Rocky, Jaws, Titanic—Lees and Frost revel in the melodrama.

The clowning duo are great at prompting kids to yell in way that makes kids feel they've thought of it themselves. A weight-lifting sequence makes a little boy from the audience feel like superman.

Deep into the silliness, Lees gives parents a look as if to say: how are they still laughing at this? But their enthusiasm is infectious and the adults hoot alongside their children. While the show does nothing new and admittedly gets cheap laughs from humiliating each other (I hope in some performances they pick a girl to lift the weights), they absolutely keep the kids' attention. With this riotous, ridiculous performance, they show that really, we’re all just big kids.