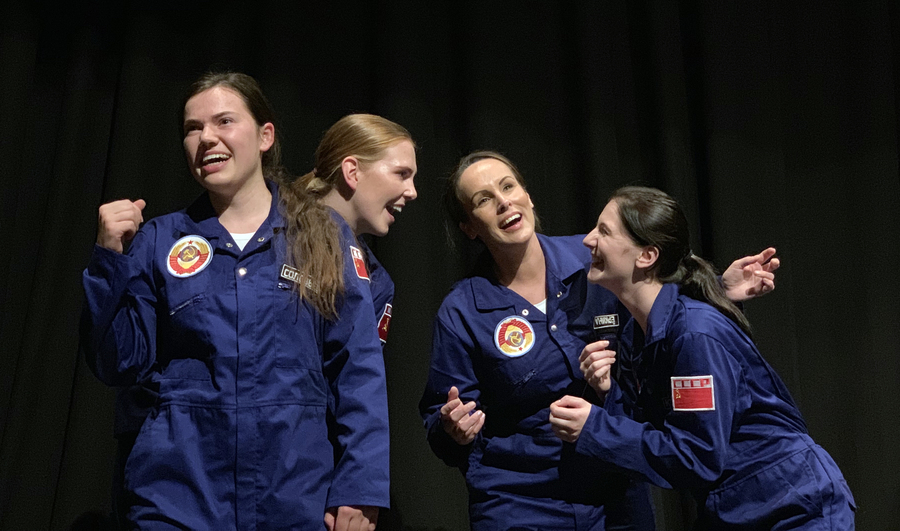 While the story of Valentina Tereshkova’s 1963 solo mission to space may be the stuff of Soviet legend (she spent three days up there and orbited the earth 48 times) it’s a little-known landmark here in the West.

This sparky production from Acting Coach Scotland aims to correct that, repositioning the girl from the village on the Volga as a global feminist icon. And it’s largely successful in achieving that aim with seven talented young female actors taking turns to cover chapters in the life of Chaika (or “the seagull”, as Tereshkova’s codename translates).

The division of acting is an interesting choice, on the one hand it’s clearly practical, allowing a team to take the stage, on the other, the variety of acting styles and accents underlines the idea that Tereshkova is an emblematic everywoman.

There is a slight whiff of Wikipedia to Mark Westbrook’s script and a tendency to tell rather than show – a little less monologuing and a few more dramatic set-pieces would lift proceedings. But the performers’ energy keeps the story moving and there are some lovely moments along the way. The cadets forming a tableau like a Soviet sculpture as they swoon over the sound of Yuri Gagarin on the radio is winningly complex. A late moment of jeopardy as Tereshkova struggles to get her capsule back home neatly pays homage to the movie Gravity. And a coda about religion and science leaves an intriguing cosmic conundrum to unravel, once you’re back on earth.