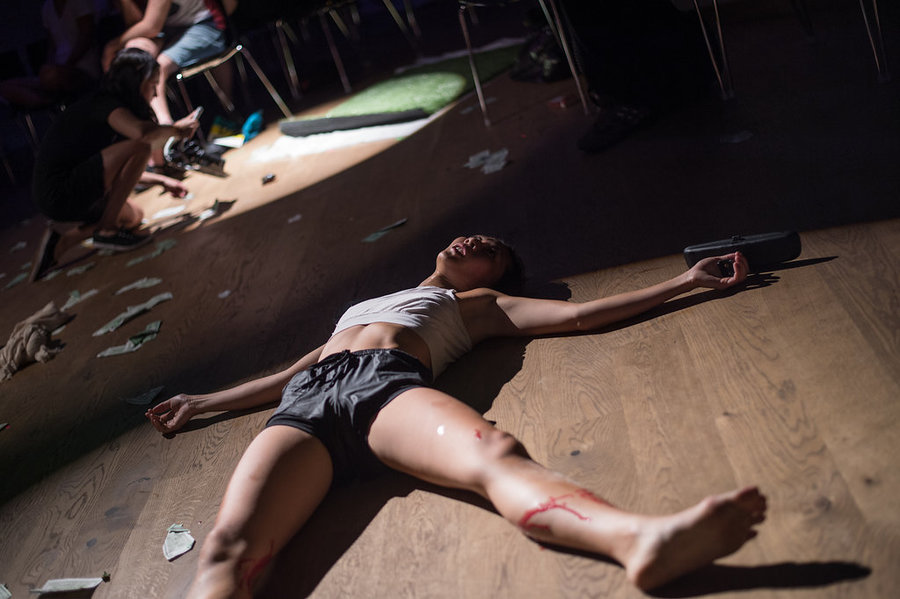 With keys clenched firmly between fingers, Chase Scenes rips into the trope of women pursued on film. Three women perform 60 different scenarios in this relentless experiment that numbs emotion through excess fear.

Projection screens switch between live feeds and recorded footage as a list blinks through 1-60. Passing the smartphone rig between them, Hilary Anne Christ, Alexandra Elliott and Ming Hon race across the debris-littered stage. One takes the lead while the other two circle; lighting, chasing, filming.

Some scenes evoke horror tropes (51. Axe) and others are classic comedy (22. Slip up). Some turn from pleasure to pain (31. Rain), while others are plainly brutal (48. Beaten). Some make more sense than others, most last the length of a throat-scratching scream and each one is frantic.

The postmodern structure feels inflexible when halfway through the screens flick through photos of all-male action heroes, dramatic music deafening, and then returns to the same format with 30 more scenarios. When it gets to 54., Nightmare #4, it feels as though they might have run out of ideas.

In each of the 60 reasons for running, the predator's gaze is assumed to be male, with technical director jaymez’s use of multi-cameras playing on the sense of paranoia and threat of sexual violence. Yet Chase Scenes also points to female strength. The trio are relentless, spending the best part of an hour running, violently chucking themselves down, then getting up again, again, again. As the lights go down, the patter of feet continues.