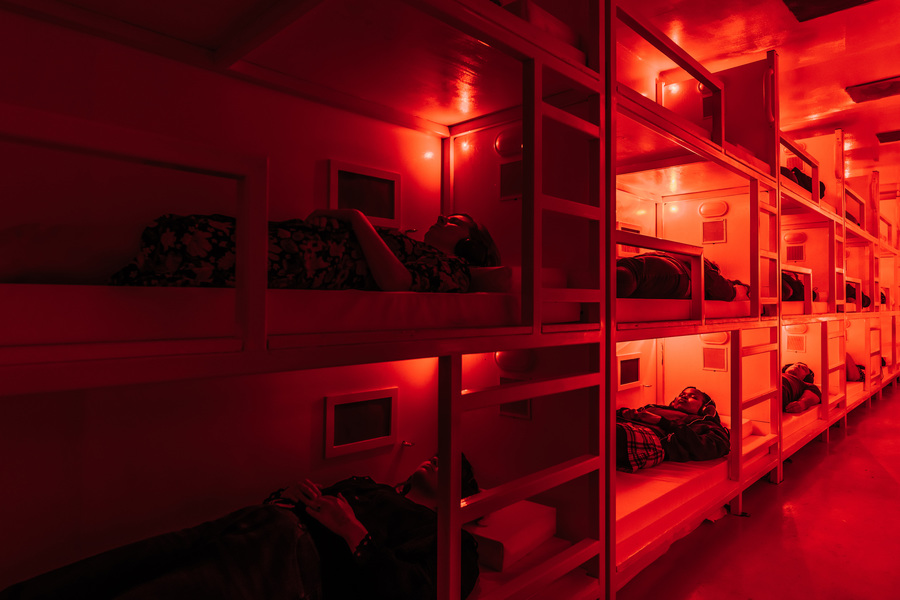 It’s very simple. Walk into a shipping container. Lie down on a white, wipe-down bunk bed, only a little bigger than a coffin. Make sure your headphones are on correctly. Now brace for terror. Coma, a brief 30 minute sensory deprivation experience, doesn’t ask too much of its audience beyond that initial leap of faith, but it offers a great deal in return.

Once the lights come down the space is pitch black and the sinister drone from the headphones becomes overwhelming. Through almost flawless recordings played through the headphones, a deft, terrifying and bleak look at consciousness and conscience emerges. What do people say about us when we can’t hear, can’t see, can’t feel?

The darkness—which is firmly enforced, with no phones or smartwatches allowed to interrupt—proves a powerful tool in twisting the perception of reality. The man whose footsteps echo up and down the narrow corridor between the bunk beds may not be there, but without the evidence of your eyes and ears, it’s difficult not to flinch away from him.

The show could, possibly, be a little more frightening – there are a few moments of pure body horror, but they don’t build up enough intensity to provoke screams. Still, those long, dark seconds are clearly enough to leave audience members shaken and delighted. There’s an escape route provided for the faint of heart: simply take the headphones off and have a snooze in the dark. But you’ll be more energised if you keep them on. Coma is an injection of adrenaline that won’t leave you for hours.