Review: Dandy Darkly's All Aboard!

A human exclamation mark, Dandy Darkly leads us into the unknown in a magnificent hour 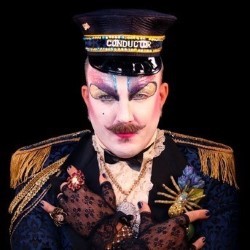 "Seats for the trepidatious!" Dandy Darkly sing-songs, proferring the front row. Trepidatious is right: on first glimpse, Darkly is a formidable host. He rushes us onto the "Gaybird Steamer", a train which crashed one fateful night in Gaybird, Georgia. The hairs on the back of our collective neck are standing on end, but Darkly's cross-generational saga is everything you could wish from a night of sinister storytelling.

Darkly's the human embodiment of an exclamation mark, his nervous energy following through from the excitable show title. He waves lacy-sleeved arms and bejewelled rings at the audience, berating us for our dependency on smartphones. Darkly vies for our attention with his louder-than-life attitude and social commentary, contrasting with the insidiously prejudiced traditions of Gaybird's inhabitants. His show strikes a tone somewhere around Black Mirror via Lake Wobegon, juxtaposing grotesquery and smalltown Americana.

Darkly's accompanied by a jazz ensemble and strong technical cues, creating a fully immersive experience. That first drum beat causes goosebumps: the score has an enveloping effect akin to sinking through silk sheets into a smoky bar. Darkly's storytelling is purely transformative, the kind of show where I don't realise I'm sitting at the edge of my seat until he takes a break to sip from a (poisoned?) chalice.

The narrative weaves together several compelling tales, monsters looming from the shadows in the form of scary figures and terrifying technology. An hour in Darkly's company feels visceral but ultimately uplifting, a cathartic experience that rewards the trepidatious.