Sound, visuals and performance poetry combine for this portrait of a drone as a young woman 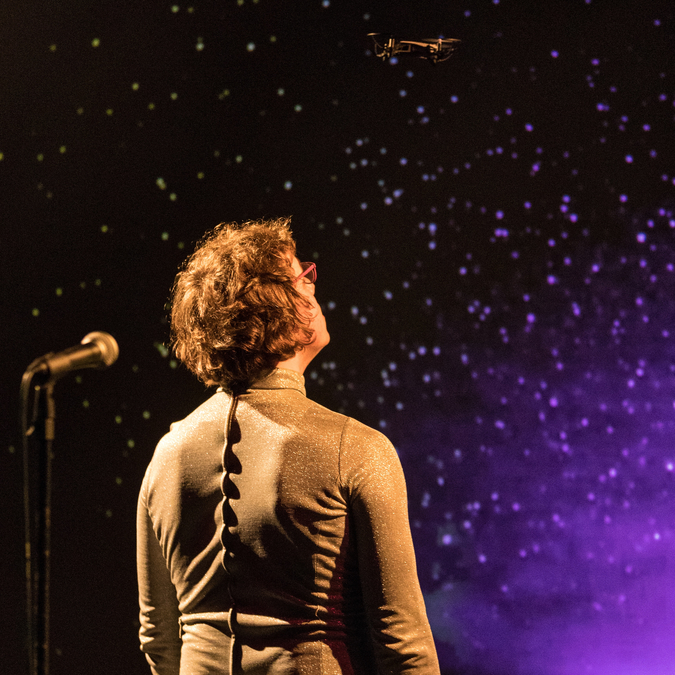 You hear her before you see her. Once you take your seat for Drone, it takes a moment or two before you realise the faint whirring sound in the room isn't emanating from Neil Simpson, the show's composer, who's sat in the corner behind a keyboard, but from the small metallic craft hovering centre stage. This is the story of the drone's daily drudgery, low-level anxiety and growing depression, and, curiously, the melancholy of attending a multi-arts performance about drones.

Giving voice to this machine's existential malaise is Harry Josephine Giles. Reciting non-sequitur poems, which sit somewhere between Alan Bennett-like deadpan observations and dystopian sci-fi, Giles' vampish line-readings accentuate the verses' dark humour. A breakdown, partly described while Giles' head is inside a filing cabinet, is followed by searches for serenity on secondment at a rhino sanctuary, through therapy and by watching It's A Wonderful Life.

Accentuating the anxiety is Simpson's electronic score and sound design, which snakes along with the drone's inner turmoil to painfully high frequencies. It's less clear where Jamie Wardrop's vaguely dystopian visuals, projected onto the back of the stage, fit in. Part of the reason is that it's hard to take your eyes off Giles' raw, humane performance, but when the visuals do catch the eye they rarely add to what's onstage. The show is described as a "live cabaret band of a video jockey, an electronic musician and a spoken word performer", and each night the multi-media components are shuffled anew. Perhaps other configurations will prove more cohesive.