The politics of Scotland and Canada collide in this dense and mature play. 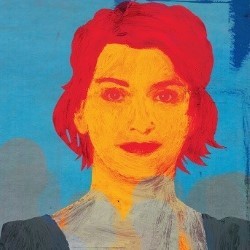 “1995 was the year the world ended,” says one older character in this new co-production from the National Theatre of Scotland and Canada’s Théâtre PÀP and Productions Hôtel-Motel. “I was born in 1995,” interjects another. The former is referring to the second referendum for Québécois independence, still fresh in their mind; yet for the latter history hadn’t even begun. This exchange is the perfect expression of this dense and mature play in microcosm, a study in nationalism and perspective which effectively represents all sides without lazily claiming any as its own.

In the present, matriarch Isabelle is welcoming her French-speaking family back to their home in Quebec, and her daughter—who now lives in Scotland—brings with her a new boyfriend, whose family came from the Democratic Republic of Congo to settle in Scotland when he was eight. Under the direction of Patrice Dubois and using a script co-written by Philippe Ducros and Scots Davey Anderson and Linda McLean, the piece is a dream-like family reunion in which the real-and-metaphorical decision about what to do with the family home is paramount.

Beneath the familial relations and fall-outs, however, it’s in this sense of differing perspectives that real meat can be found: in the anger of an adopted son who hisses that a room full of Francophones have to revert to English when just one English-speaker is among them; in the juxtaposition of French as the language of self-determination in Quebec, and of colonial oppression to the Congolese; and in the disgruntled conservative uncle whose opinions are three-dimensional and borne simply of a different viewpoint upon the world. It’s a piece in which simmering anger is tangible, but what comes after this anger is also explored.