Review: Good Women by Get By Theatre 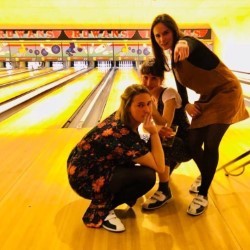 Good Women by Get By Theatre

There’s so much serious theatre at the Fringe that it’s a blessed relief when you find yourself in a show whose sole intent is to make you laugh. Get By Theatre have brought Good Women to the Free Festival on a shoestring, but the fact that they’re performing in a teeny tiny attic space at The Counting House without a tech doesn’t take away from the fun of it.

The premise is ludicrous: Kathryn, Madeline and Morgan are members of the Good Women Evangelical Congregation, an organisation that uses the power of “liturgical dance” to encourage sinful characters to change their ways. They’ve each come to compete at an international competition but things just don’t go to plan.

Recent LAMDA graduates (and founders of Get By Theatre) Emma Rendell, Eva Scott and Emily Steck, play this trio of deviants with energy and charm, if not with quite the nuance required to make these characters more than just silly caricatures. Steck’s script is witty enough that the company get away with it, and the dance sequences—including one in which Scott names her Christianity-inspired moves as she goes along—offer plenty of laughs too.

The plot doesn’t really bear scrutiny and the decision to have Kathryn, Madeline and Morgan tell their backstories in a series of fourth wall-breaking asides is a curious one, but it doesn’t matter – Good Women is a great way to start your day at the Fringe. Let’s hope Get By more than get by this this year and work out a way of bringing a show to a venue more suited to their talents in 2019.