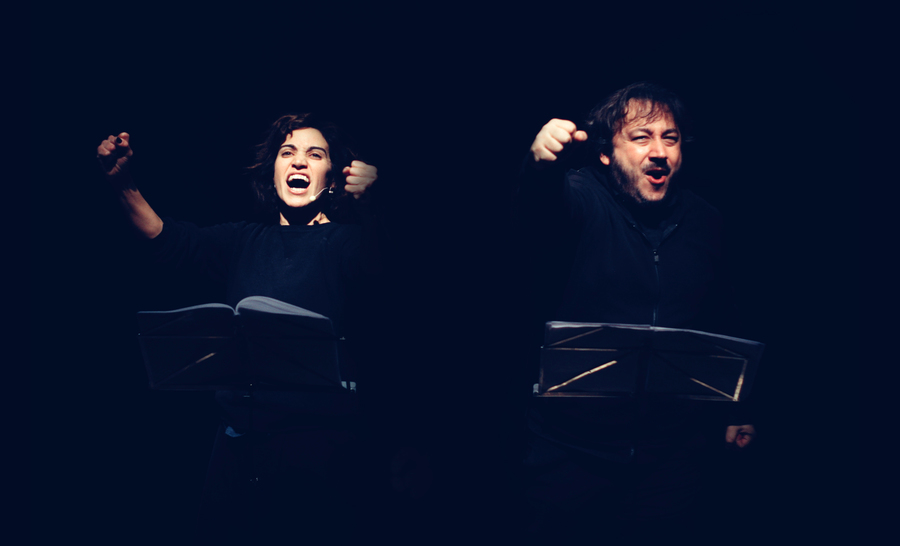 Happy Hour is about forced smiles. Set in a state that puts the happiness of its citizens above everything else—even to the point of insisting on it at gunpoint—Cristian Ceresoli’s deceptive script picks at the unchecked encroachment of fascism today.

It offers a child’s eye view on a changing world. Dressed in matching slip vests and short shorts, Silvia Gallerano and Stefano Cenci play siblings Aldo and Kerfulle. Enacting ordinary family life—football matches, ballet lessons and scoldings from mum and dad—they let us glimpse their shifting circumstances in a shifting state. Their father picks up a pay rise, then a new house – the product, perhaps, of people going missing. Deported or dead? Either way, everyone’s happy, right? They'd better be. The state insists.

Like the Italian’s last Edinburgh show La Merda, Happy Hour takes off like a turbo jet. But where that purge poem about anorexia seemed spewed straight from the gut, Happy Hour has fewer reasons to overload. Its storytelling needs clarity more than viscerality and the child’s eye perspective tangles a narrative that’s not entirely clear.

Ceresoli’s writing has its fair share of smarts, picking at the everyday diktats that lurk in democratic socieities—body fascism, gender roles, the pressure to push on in life through cash, space and stuff—but it’s target isn’t entirely clear. Is it a critique of free market capitalism or contemporary populism? Neither justifies the way it coerces the imagery of concentration camps into a camp proxy that demands the dispossessed do nothing but dance.