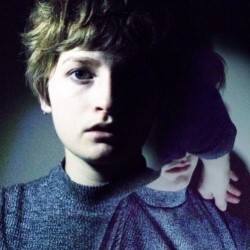 Cold white lights flicker on and off as the encroaching darkness threatens to overwhelm Sheyna (Rachel Elizabeth Coleman) and Ben (Tom Mason). In Addition’s atmosphere appears designed to mirror the couple’s declining mental health, but it lacks the weight to feel truly oppressive.

Sheyna’s father is critically ill; freelancer Ben’s career, and sanity, are under pressure. These millennial lives don’t look promising. Daisy Minto’s setting is a near-future where healthcare is privatised. The only way to afford the insurance premiums seems to be digging deeper into debt.

In Addition presents an incomplete argument in favour of keeping the NHS and does little to dismiss the counter-opinion that favours carving up the system. Minto’s vision highlights touching little details of the couple’s burdened relationship but it loses sight of the overall point.

The central relationship hangs by a thread, clinging on through furtive touches and brief moments of tender connection. Mason’s delivery fails to capture such a precarious romance with only sporadic flashes of emotional vulnerability. Coleman’s subtler performance is of a woman who bears everyone else’s problems stoically on her shoulders. Is this character a metaphor for the mounting pressures of the current NHS? Minto’s direction makes it too difficult to tell.

Without a proper support system, the future of mental health is bleak. In Addition aims to highlight the breadth of the potential issue through the lives of a single couple. But the show itself is out of balance.