Space expands into a deep nothingness 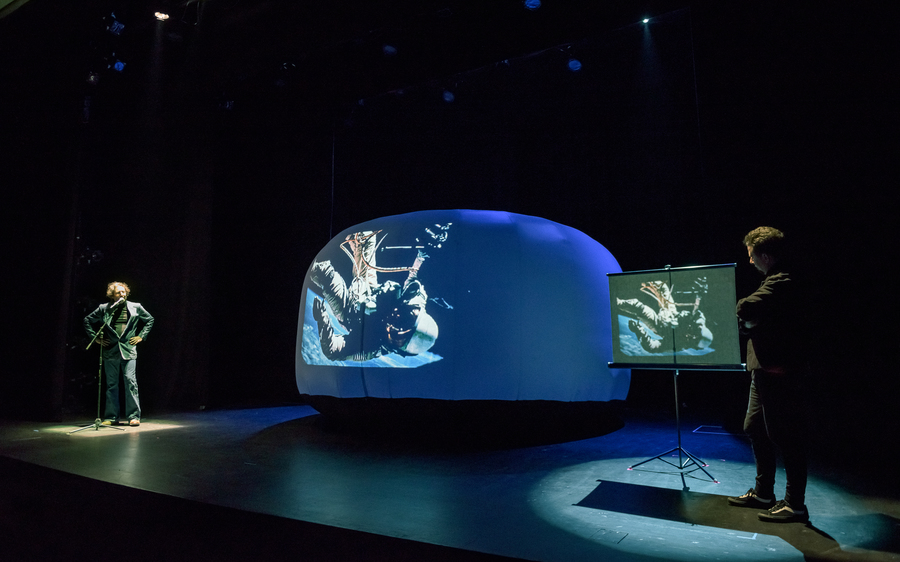 It’s difficult to imagine that Thaddeus Phillips intended this to be so close a metaphor for deep space: flashes of light and points of substance amid light years of nothingness. Sure, Inflatable Space has much of the wit and lightness Phillips brought to 2015’s hit 17 Border Crossings. But where those miniatures worked so well, here he struggles to transform a strong and whimsical central image—a large inflatable torus representing deep space—into something that stretches the hour.

Tonally it leaps from pillar to post. We meet Steve Howard (played by Ean Sheehy), the controller of NASA's Voyager mission (current probe speed, one million miles per second; location, somewhere in interstellar space), nerdy and nervy, competing with the sound of a Polish wedding to deliver a presentation in a crappy motel conference centre. Within three minutes he’s channelling the peroration of a Presidential candidate. Phillips plays a version of himself: he begins whimsically, making comically general phonecalls to NASA, but can't quite reconcile this with an at-times serious sit down interview with Howard.

There’s some memorable moments, via some nice images. A piece of pre-recorded trickery inside the inflatable doughnut; projections into its taught skin; a 'Voyager-on-a-stick' sequence. But they drag interminably. Scenes last longer than they ought, for no reason other than the music is yet to finish.

The end trips over an attempt to reach epic heights, but instead of presenting one clear image throws up about four. We finish in silence, the audience less spellbound than unsure when to actually clap. Thaddeus' script memorably describes the audacious Voyager missions as "something a child's mind would think up". Inflatable Space perhaps just can't contain its wonder.