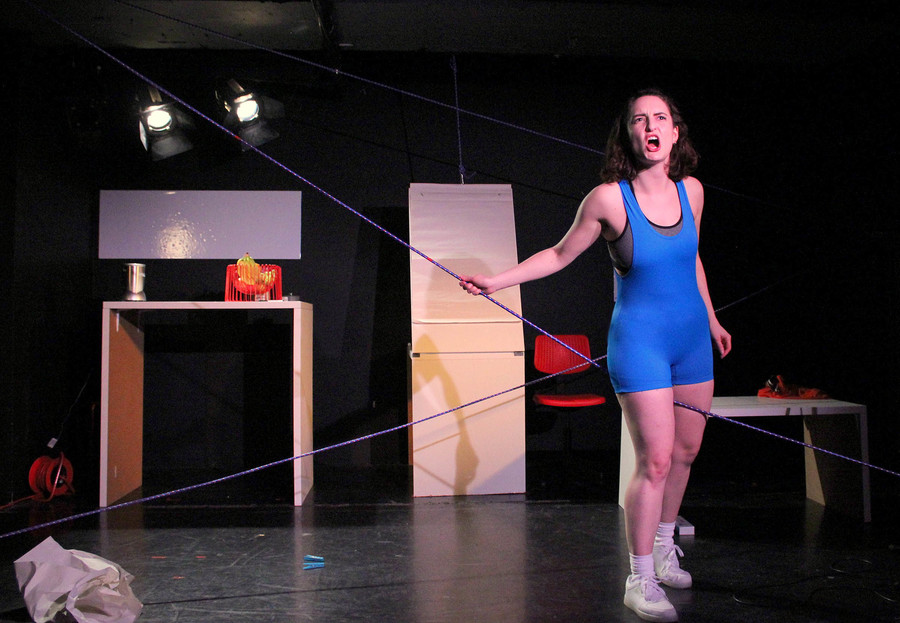 Dublin-based company MALAPROP present their lecture-style play Jericho, which follows Maeve O'Mahony's unnamed character as she navigates the worlds of journalism, and WWE.

Using a variety of subjects and performance styles, MALAPROP have created a show which is filled with uncertainty and surprise, perfectly encapsulating a show which centres around online news and entertainment: Three false starts as O’Mahony attempts to find the perfect entrance music; ASMR as John Gunning crunches cornflakes into microphones; O’Mahony taking a bleep test as she talks. There are ideas and styles layered over each other which both bathe and drown us in information, as the internet does.

Three screens at the back of the stage show the mouths of colleagues speaking in meetings. They grotesquely lick, bite, and pout as they discuss articles. Collections of headlines—some fake, but seeming very real ("Elon Musk kicks a swan")—pop up one after another, questioning our familiarity with the outlandish. Politics is entertainment and entertainment can be politics, after all.

O’Mahony’s character writing an article about WWE sparks the idea that people just want something to believe in, and this belief can make something happen. We see snippets of texts with her mother about the Irish abortion referendum – a flash of something quite serious amidst the ridiculousness of wrestling ceremonies. But this seriousness is again layered with some light comedy as her mother asks what a certain meme’s phrase means.

More lecture than narrative, Jericho is a scrapbook of a show which pieces together ideas about news, politics, and entertainment in an absorbing, funny, and intellectual piece.