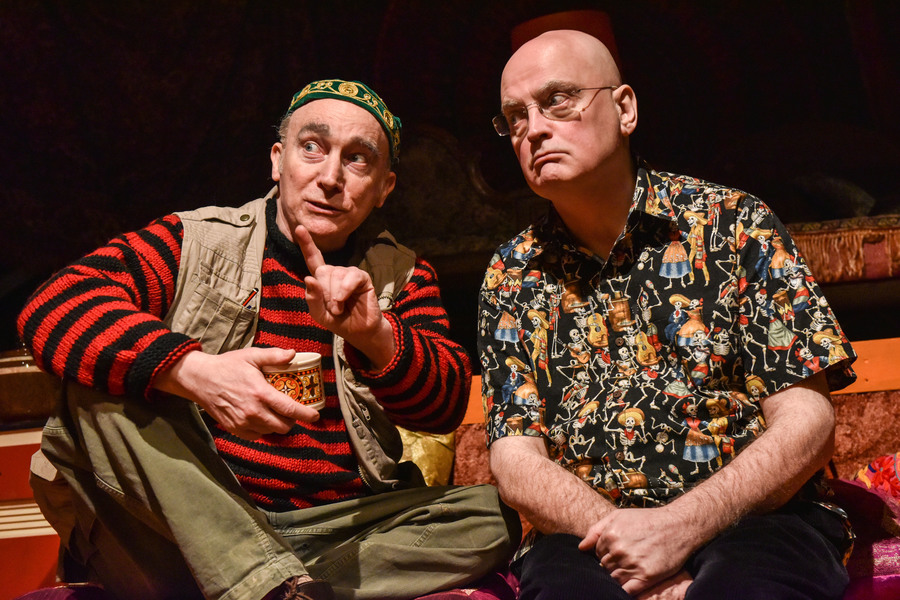 There's a lot to like in this piece, by Terry Johnson, about the life and work of Ken Campbell. For those unfamiliar with the British theatrical giant, it's probably just best that you see the show. Johnson's script does a great job of providing a précis of the sheer breadth of dramatic inventiveness, logistical improbability, theoretical challenge and pranksterish glee that comprised his friend and colleague's oeuvre. The metaphor of stepping through a "gap in a chain link fence" that he opens with is totally apt.

Johnson's script, while sometimes feeling a bit like a radio play, is snappy, funny and treads a nice line between matter-of-fact description of outlandish events, and poetic reflections on their impact. It's also inventively staged with a lounge-like setup that totally fits this hippyish bill. But it's Jeremy Stockwell's turn as Campbell, to Johnson's narrator, that really wows. The eyebrows are to attention, the stare is of an intensity that is genuinely unsettling.

The problem is, this never shakes the feeling of being a bit of a nostalgia trip for old actors. That's not to say celebrating the life of a creative powerhouse is a bad thing, but the leap is never made from obituary to what that means for us now. There's a scene where Johnson meets Campbell, clearly past his zenith. He talks of a time, "back when there was hope. Back when I had hope." It's that time which forms the exciting, creative heart of this piece, and for Terry Johnson, it's the memory of this inspirational time and this extraordinary man that keeps a fire burning inside him. But for the rest of us, those who were never Ken's chums, the morality of this play starts to feel slightly theological, leaving us in a postlapsarian struggle to search eternally for a truth that we can never really know. I don't buy it.