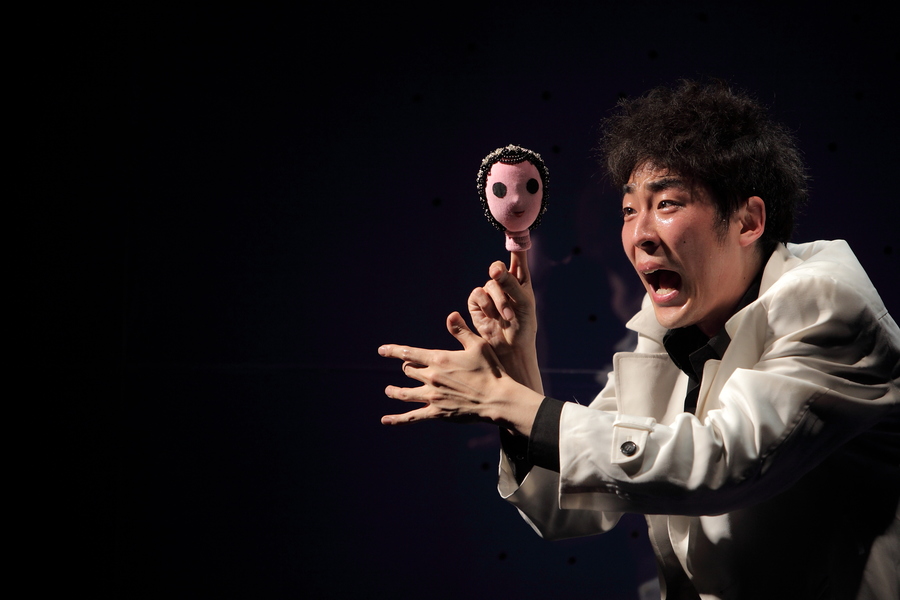 Shakespeare is the world’s most popular playwright, with his productions staged all over the globe. This particular version is a one-person adaptation of Macbeth that hails from Korea. Pared down to an hour, it captures the key moments of the original play through movement and spoken text, which is translated back into English surtitles.

Using props and puppets to represent the other characters, the show has a heightened sense of artifice, like a child playing with toys that are easily disposable once they are bored of them.

Two performers, one man and one women, alternate the role nightly. It’s physically demanding with its constant movement, much of which is expansive or fast. Battles and lengthy journeys are depicted literally, whereas Macbeth’s aspirations are compared to a bird trying to take flight.

Four small boxes mark out the corners of the playing space, and the actor leaps from one to the other to mark scene and tone changes. Constant forward motion keeps the piece moving and draws attention to Macbeth’s unalterable fate.

There is a good use of colour on the all-black stage. A set of silver goblets are the banquet guests, and red is a predictable choice for Duncan’s murder – though it's staged in a particularly creative way. The colour also punctuates the appearance of Hecate, making the small puppet stand out well. Lady Macbeth is similarly styled though her importance is lost within her small scale. These visuals further support understanding and its simplified text is easy to follow.

This production showcases strong, physical storytelling and a well-considered concept, but some of its choices—like extended sections narration—prevent the audience from fully connecting with the story.