Review: My Left Nut by A Prime Cut and Pan Narrans 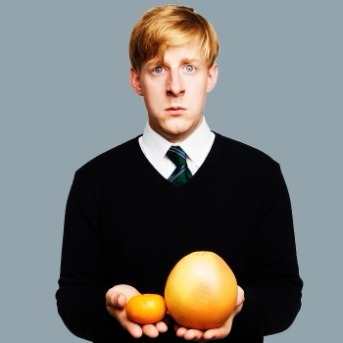 Michael's dad died when he was eight years old. Several years later as a teenager, he was doing all the things teenage boys do – mostly hanging out with his mates, drinking and wanking. He was also busy hiding an embarrassing secret.

One of Michael's testicles had developed a swelling so large that schoolyard rumours about the size of his junk earned him the nickname "Stallion". With no father to ask for help and his mum busy raising four kids and working, he wished that it would just go away. It didn't show any sign of disappearing, but the rumours didn't exactly harm his reputation.

With co-writer Oisín Kearney, actor/writer Michael Patrick uses buckets of humour and poignancy to not just tell a funny story about genitals, but to also look at the process of dealing with his father's death, coming of age, and paying tribute to his mother's strength. It's a sophisticated and complex script crafted with plenty of surprises. Switching between belly laugh-inducing situational comedy and unexpectedly mature insights from a young lad makes the storytelling varied and engaging.

Patrick's performance is delightfully vibrant. He has an elastic physicality and a finely tuned sense for the comedic. Merely pulling a face sends much of the audience into hysterics. His intrepid narration, though familiar to adults reflecting on their own teen years, is engaging and alive. Combined with the tonally varied script, this is an excellent show about growing up and learning to look after yourself in spite of stigma.