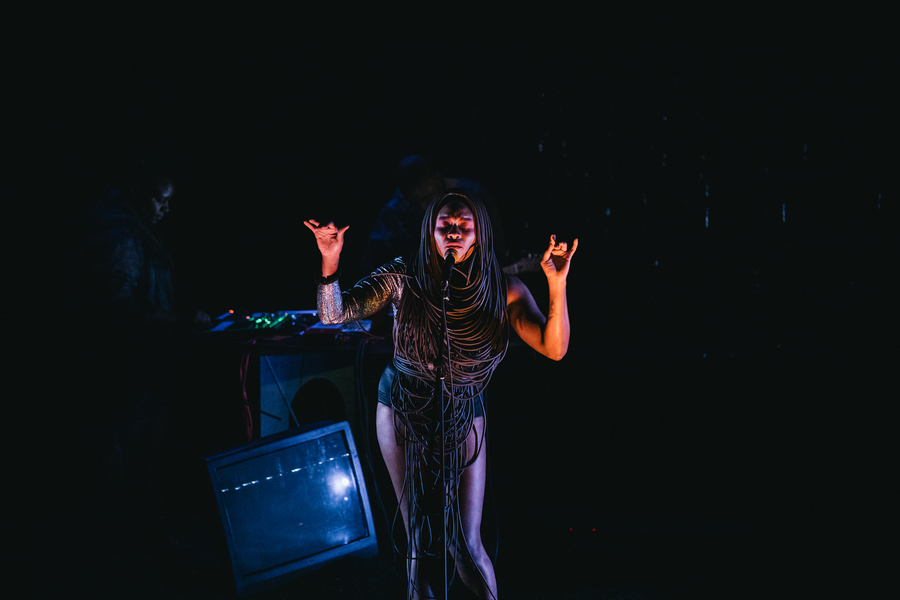 Grace Jones is a Black model, musician and actor known for expanding the western notion of beauty to include Black women. In 1981, her album Nightclubbing garnered huge acclaim, further cementing her fame. Fast forward 34 years, and three young women are denied admission into a London nightclub because their skin is too dark.

Inspired by Jones’ work and the discrimination Black women still face, artist and writer Rachael Young celebrates their resilience with dance and music. Two onstage musicians, Leisha Thomas and Mwen Rukandema, provide a sound bath of synth-pop and new wave music reminiscent of Jones’ album. Young, clad in a glitter leotard, stands out against a set of black vinyl and plastic sheeting. Her movement, accompanied by voiceovers and spoken text, add to the other-worldly design aesthetic by Naomi Kuyck-Cohen.

She is a compelling performer with excellent physical skills that are further showcased by Nao Nagai’s lighting design. The narration, broken into short sections, draws on Jones’ life and another unnamed woman’s experiences of being Black in a predominantly white society.

There isn’t a linear story but the text, design and music juxtapose the reality Black women face with a world where they are goddesses. Fitting for the name of the show and its inspiration, the performers create an all-consuming world reminiscent of a nightclub where Black women transcend racism. Simultaneously elevating them to the status of celestial bodies, it demands white people give Black women the respect they deserve.