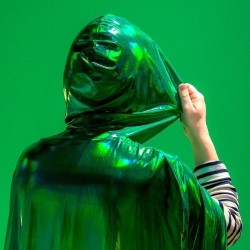 Pathetic Fallacy is performed unseen by a new performer every day, a now very familiar format on the Fringe. The show's creator Anita Rochon would perform, but she is reducing how much she flies, and so a stand-in Anita is required. For this performance, comedian Daniel Connell steps up, often adding to the laughs with his expression.

Much of the play is presented as lecture, and there are interesting facts to be learned. Storms named after men lead to fewer deaths; weather reporters once drew the weather on a chalkboard. However, these extended lectures leave the guest performer sitting to the side, and throughout the whole show they are under-utilised.

The show utilises green screen and projection, with prompters for the guest performer, mimicking the way a weather report is created. There are a couple of small glitches in the tech, but this technology allows for the most interesting part of the show where Rochon and the guest performer meet in conversation, seated together on a plane. The recorded Rochon asks big questions, and often there is not enough space left for the guest performer to reply. It is unclear how intentional this is. Still, repeatedly employing the clincher, "how does it feel to know your very existence hurts the planet you are on?", Rochon's questions certainly linger in the minds of her audience and her guest. With that as her goal, the show is a success.