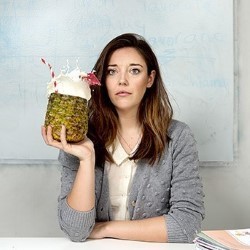 For two thirds of Pickle Jar, it feels like a spruced-up version of the type of 90s rom-com—Notting Hill, for example—that Miss (Maddie Rice) watches with her sassy flatmate. Instagram, dating apps and mindfulness are cosmetic updates to a seemingly well-worn formula. But then the show skilfully swerves into darker territory, starkly bereft of a chirpy, Hollywood ending.

Rice, who also wrote Pickle Jar, won praise for her performance in the touring production of Phoebe Waller-Bridge’s Fleabag. There are traces of that play here, in the way the writing flips the script we think Miss—a clumsily well-meaning English teacher—is following. The Bridget Jones-style mishaps she narrates fold into trauma as the story fills in its skipping chronology. Rice is effortlessly versatile, playing an array of patronising counsellors, fellow teachers and bovvered schoolkids. Her superb comic timing (and writing) is a gift. She sets the tone from the show's deceptively sunny start.

Director Katie Pesskin, who also helped to develop Pickle Jar, keeps the scene and character switches clear, ably assisted by Mark Dymock and Ciaran Clark’s punchy lighting and sound design. If anything, the breezy set-up slides into too much of a groove before the grim reality of recent events in Miss’s life breaks in. The writing sometimes feels constrained by where it started, with quips still dropping a little too readily. But the quiet devastation of Rice's performance by the end is no joke.