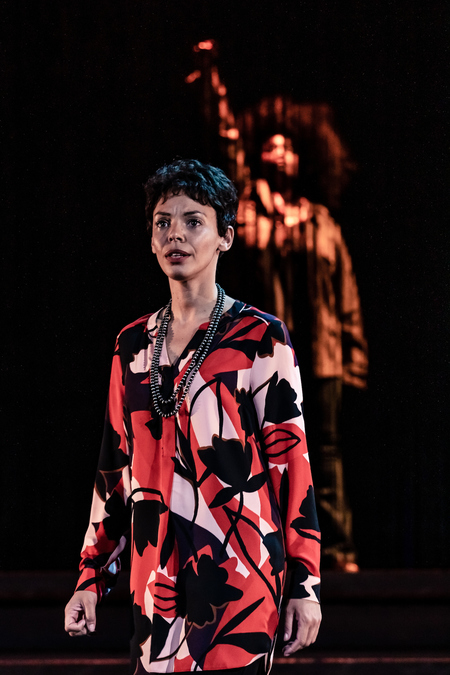 In adapting Scottish makar Jackie Kay’s 2011 autobiography Red Dust Road, co-producers the National Theatre of Scotland and Home in Manchester are bringing to the stage an essential story for our times. This isn’t just the deeply personal tale of Kay’s birth to a Mormon mother from rural northern Scotland and a visiting student from Nigeria, and her subsequent adoption by a working class white couple from Glasgow, but also a more wide-ranging story of growing up mixed-race in a Britain which was overwhelmingly white, and in places fearful of and angered by difference – and which, in many ways, remains so.

The characters around Kay are memorable: we come to know her adoptive parents John and Helen (a wonderful, easily humorous double act between Lewis Howden as her Communist Party activist father and Elaine C Smith as her endlessly wise mother), her religious birth mother Elizabeth (Irene Allan), and her intriguing father Jonathan (Stefan Adegbola), a respected religious figure in his homeland, whose evasion of publicly accepting his daughter is intended to preserve his reputation.

In the fine-focus details of Kay’s story, as adapted by Tanika Gupta, her life story is absorbing and emotionally powerful. Sasha Frost binds the play well as a hopeful, inquisitive Kay, piecing the fragments of her identity together. On the subjects of building your own self as an adopted child, and on acceptance of one’s own racial identity (and, to a lesser extent, sexual identity), director Dawn Walton brings together a work which is resonant and truthful.

Yet somehow this flagship Edinburgh International Festival production feels physically small-scale, with the wider stage under-utilised. It feels like an excursion, rather than a journey, into the reality it seeks to reflect.