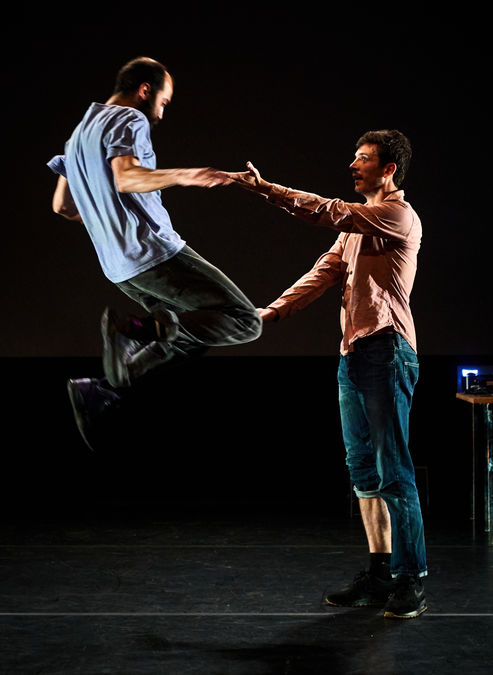 Art gives us access we wouldn’t otherwise have. When an Irish prisoner recalls his first experience of prison in The Examination (four stars), his entire expectations were based on TV. He waited to be shaved, hosed down and strip-searched. Art affects the world that we see.

The brilliant Brokentalkers go gunning for that in this slippery and self-aware interrogation of criminal justice. As well as a striking exposé of Ireland’s antiquated penal system, homing in on the inhumane (and illegal) practice of "slopping out" still not phased out, The Examination puts our prejudices and presumptions to the test. It demands an act of self-examination.

After a plea from a prisoner to be seen “not as animals in cages but as human beings,” the lights come up on a burly figure in a gorilla costume. Wille White, an actor with experience of penal institutions, is grilled by Brokentalker’s Gary Keegan about his time inside. With a silk hankie peeking out of his suit, Keegan lectures us on the Victorian “theory of the born criminal", that credited criminality to genetics. His views seem underscored by his own experience of violent assault. It’s an uncomfortable dynamic: an interrogation of its own.

But neither actor’s all they seem to be. When White talks us through his unseen tattoos—a gremlin, a Smurf, George Benard Shaw—it’s not clear whether we ought to trust him. Keegan’s outward civility mightn’t mask the viciousness of the views he espouses, but it does soften their edges enough that we listen in. Again and again, The Examination pulls the rug out from under you.

Its point is that people can change—for good and for bad—and art can play a part in that process. It can also, just as easily,  prevent meaningful change, entrenching prejudices rather than breaking them down. The distinction is whether we’ll see (and judge) others as they are, not as they once were.

Slopping out might seem worse than solitary confinement. It’s not. Across America, some 80,000 inmates are held in single cells with minimal human contact for more than 22 hours a day. New York’s Dutch Kills Theatre show it up as a slow form of torture in Solitary (three stars).

It’s a grinding watch, or it would be were Blake Habermann’s direction able to resist the itch towards incident. How to keep interminable boredom interesting? The more things and events Cooper finds to mime, the less truthful Solitary starts to seem.

It’s stronger when it takes flight. Using ropes to demarcate the cell, Habermann lets us into the prisoner’s head: the walls splice open, the room starts to spin, entangling Cooper in a cat’s cradle. Flashbacks and hallucinations swim through his cell. With Cooper’s focused intent at its centre, Solitary shows that isolation and imprisonment leave binds that will never be fully undone.

People need people, simple as that. Bertrand Lesca and Nasi Voutsas have spent the last few years fighting onstage, first in their debut show Eurohouse, then in Palmyra. The End (four stars) calls it quits. It’s a hymn to friendship – their friendship, male friendship.

It starts by sprinting ahead. A clumsy slideshow plays in silence, projecting the planet’s distant future. In a thousand years time, it says, buildings and bridges will fall. In eight thousand, human civilisation with be gone. In 20, the earth will tilt on its axis. It will fall out of orbit and, over millennia, will slowly be consumed by the sun.

The End dances in the face of that galactic death. It lives for the day and, in a downbeat, downright apocalyptic Fringe, it offers something like hope – a reason to live. All Lesca and Voutsas—Bert and Nasi—do is dance together. Neither’s a natural, not even close, but still they dash around like gawky gazelle, leap like river salmon and attempt lifts like they were Bolshoi leads. It’s clumsy, cack-handed and utterly endearing. Nothing more (nothing less) than two people at play.

And these two turn play into an art-form. They spin games out of nothing – rolling around, spinning circles, balancing on chairs. One alights on a possibility. The other joins in. Two little boys. Here and now.

Until, that is, they’re not. The End knows nothing lasts. People change; things fall apart. As it prises open that present moment—so fragile, so precious—and begins to admit the future once more, The End imagines that friendship falling apart, tilting on its axis as two people slip out of each other’s orbit. It’s an exhortation to take pleasure in people and to live for the day, and it’s as melancholic a thing as you’ll see all festival. Fin.