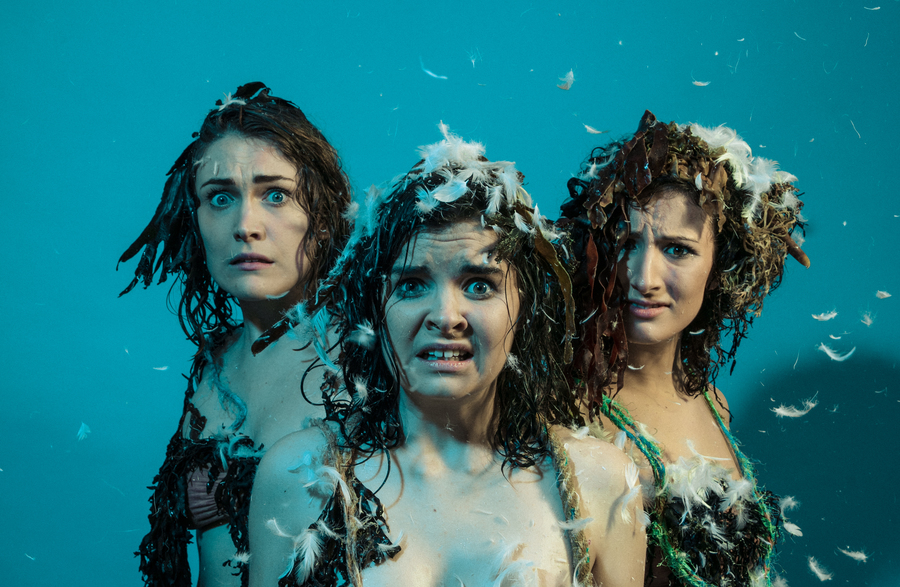 The words “sledgehammer” and “nut” spring to mind when watching Sirens, a well-meaning but entirely cack-handed takedown of victim-blaming in contemporary culture.

It starts promisingly, with a witty introduction of our protagonists – the mythological creatures, half-human, half-bird, who lured sailors to their deaths with their enchanted singing. It’s when the sisters are transported to 21st-century Hastings—in an attempt to track down and destroy an Ancient Greek text that misrepresents them—that things take a turn for the problematic.

First, the good points: Zoo Co are big advocates for making theatre more accessible to audiences with different needs. This performance, like every performance of the show, is “relaxed”, meaning we don’t need to feel confined to the strictures of traditional theatre etiquette. In addition to that, captioning is creatively integrated throughout and there’s lots of British Sign Language too, with the Sirens learning to sign so they can communicate with Tobi (Jamal Ajala) – whose deafness makes him the only man safe from the fatal power of their voices.

But good intentions don’t necessarily make for good theatre. This show may be accessible but its heavy-handed swipes at everything from homophobia and ableism to sexual harassment, racism and the power of the patriarchy—the fact that the Hastings Museum is run by an old white guy means that “everybody else’s stories just don’t exist”—makes it almost unwatchable. It doesn’t help that Zoo Co’s founders just don’t have the acting chops to turn their seriously shonky script into something credible. They're a company in sore need of an outside perspective – dramaturg, director, ideally both.