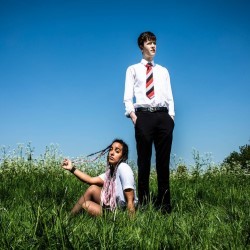 Like the Vikings seen walking the shoreline by the mother of one of its main characters, there’s something timeless about Songlines. Backed by live music from folk group Trills, Tallulah Brown’s play could easily lapse into whimsy, but instead rides a wave of gentleness and empathy for teenage awkwardness.

A resentful Stevie (Fanta Barrie) has been abandoned by her flaky mother in a rural village in Suffolk with her puritanical grandmother. There she meets Stan (Joe Hurst), the boy who cuts her grandmother’s grass and stumbles into life’s potholes. Their tentative, evolving relationship is the heart of the play.

It would be easy to overlook the minor key of Brown’s writing, to mistake its quietness for flimsiness. But that would ignore her keen ear for the fragility of teenage emotions. George Chilcott’s production sometimes meanders but it also captures the misses: the things not quite said or blurted out defensively.

Barrie and Hurst—both of whom are making their professional debuts here—are a strong, contrasting pairing. She’s sarcastic, uncertain and wounded, poised for attack as defence. Hurst, meanwhile, beautifully underplays Stan, finding something funnier and less predictably drawn than just ‘the local loner’ in his off-the-cuff delivery.

It’s not sugar-coated. There’s a reason why Stevie left her last school, and it’s brought to light by something that happens to her during the play. But this is woven into the wider story of two people trying to make sense of where they are in their lives. There’s a wistfulness to Trills' music that’s not easy nostalgia.