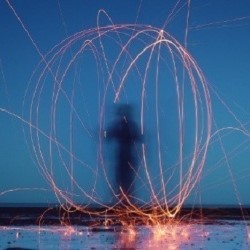 This is an odd one. Billed as a "two hander musical about the brain's response to grief", Sparks is a perceptive piece of observational storytelling punctuated by devastating moments of reflection. These aspects of the production are largely confined to separate narrative strands which, while they inevitably converge, fail to compliment each other effectively. Both are enormously accomplished in their own right, however.

Co-writers Jessica Butcher and Anoushka Lucas occupy two very specific roles though they portray the same character. Jessica communicates emotions and events through conventional dialogue, while Anoushka, stage right behind a keyboard, does the same through song. That the cast are able to take this approach is testament to their chemistry. Their commitment, fearlessness and sharp writing abilities are more than enough to weather any unconventional experiments in form.

Making a treatise on millennial angst and tawdry romance in the age of internet dating gel with a teary-eyed account of a mother's deteriorating health and eventual death, however, is an issue the performers can't quite overcome. The story of a self-described feminist attempting to achieve some form of self actualisation as she mourns the passing of her closest role model lies buried within Sparks, but its two narratives aren't working together to uncover it.