Review: The Bacchanals by Mikra Theatricals

This cult of luvvies have a lot of potential, but squander it on overstuffing the script 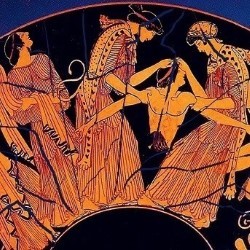 There are brilliant hints of promise in Mikra Theatricals' The Bacchanals, a dark comedy set in the chorus dressing room ahead of opening night at Euripides' Bacchae. The direction keeps the show constantly moving, visually vibrant if sloppy around the edges. The script too has its moments but it's lacking a cohesive central plot that really anchors the action.

The cast carry a strong sparring energy to the show, ideal for their eventual descent into madness. What does them a disservice is the script's skittish nature. It's hard to understand character convictions in the hubbub of discussion, the writing appearing to throw several ideas out there in order to see what'll stick. It's hard to root for characters whose motivations we can't grasp.

Bess Roche's character rallies against yoghurt adverts in a perfect example of the script's ethereal approach to broader topics. Her chorus member's body image issues are merely juxtaposed with the sexualied yoghurt imagery, left to the audience's cultural familiarity or emotional reaction to fill in the blanks.

There's an exclusionary nature to the references too: a discussion of Emma Rice's Globe tenure is bound to alienate anyone who isn't reading The Stage on a regular basis. There are points where the show soars, especially surrounding a discussion of nudity on stage. Alexandria Macleod's meltdown is spectacular too, rallying against the Man and the Mum in equal measure. However, this glimmer of commentary's lost in inane chatter of cliche luvvie chat and pining after exes. Not enough method in the madness.