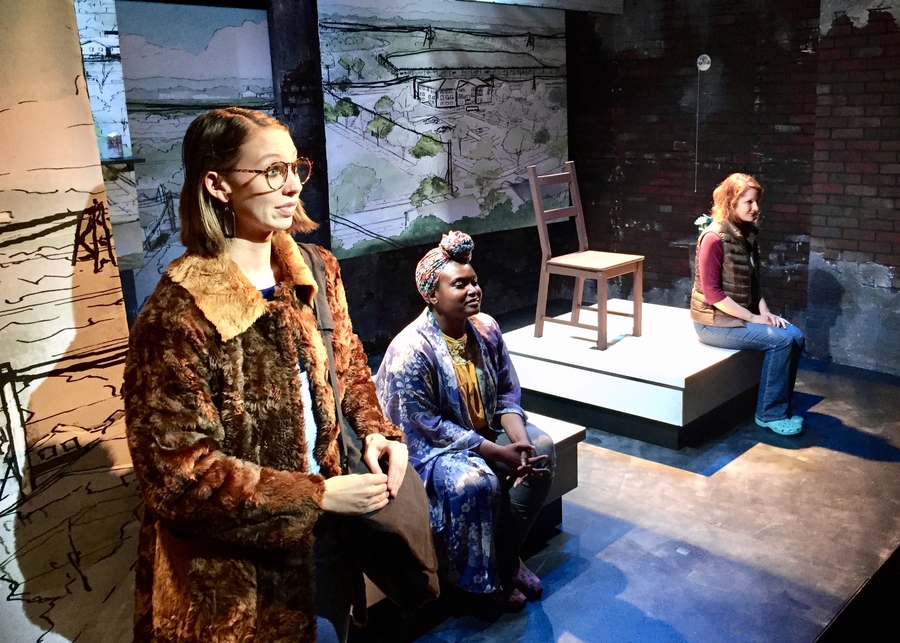 Two adjacent balconies become the backdrop for a surreal look at the state of American communites, as two next-door neighbours all but ignore each other in Jean Ann Douglass’ play.

Newly moved in, Dora’s desperate to engineer a neighbourly natter with Ronnie. She brews two cups' worth of coffee and brings two glasses to go with her bottle of wine. Her anxious acquaintance can only grimace a smile and make excuses. She only sees the crazy lady next door.

Ironically, Ronnie’s just as eager to host, sprucing up her flat to boost its appeal on Airbnb. Hooking a houseguest Jane, who may or may not be a beaver retracing her ancestral roots back to Rhode Island’s cull, Ronnie does her utmost to make her guest feel at home.

Home’s the key here, and Douglass’ three-hander takes a side-eyed glance at gentrification, atomisation and the erosion of community bonds. With new arrivals and historical homecomings, it asks who belongs where, who moves in, who moves on?

It’s effortful in its oddities—a beaver on Airbnb, LOL—and for all Douglass’ monologues reflecting social reclusion, it does leave the action feeling stilted and somewhat monotonous. Director Jess Chayes draws strong performances from her cast—Lori Elizabeth Parquet is sunshine personified as Dora, while Amy Staats’s Ronnie is pallid to the point of petrification, and Dinah Berkeley toys with her toothsome out-of-towner—but The Providence of Neighboring Bodies all feels a little too obtuse.