Review: The Squirrel Plays by Part of the Main

No squirrels were hurt in the making of this play 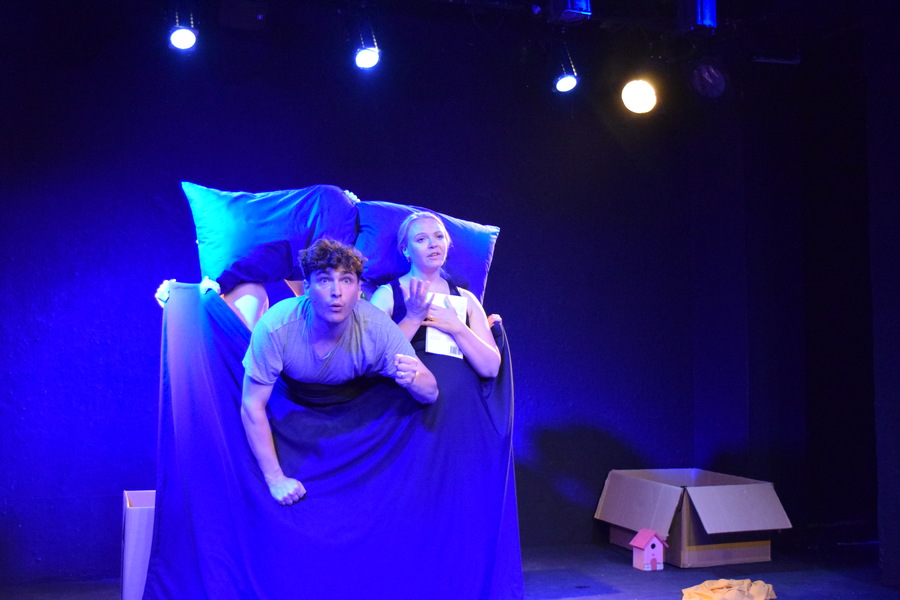 By the time it becomes clear what this play is an allegory for, the word "squirrel" has become slush. Mia McCullough’s new writing from America uses wordplay to create a hostile environment and speaks—too plainly—about key issues in America today.

In a repressed suburb, paranoid Tom (Hugh Stubbins) and practical Sarah (Amy Reitsma) move house, an unwanted squirrel in tow. Their marriage suffers as Tom refuses to sleep where he can hear the squirrel scratching. After a seemingly infinite time in a contextless world, they begin to see the squirrel as an unplanned child, and suddenly the script grows wild. It ploughs through every argument for and against the idea that taxes should pay for abortion, with all situations reframed in the context of squirrels: an unplanned squirrel; the shame of giving a squirrel away; being able to pay for pest control to get rid of a squirrel. Squirrel, squirelr, suierrql.

There’s nifty direction at play, altering perspective in domestic situations with an upside-down bed and a folding human washing machine. The ensemble are confident on the traverse stage. Disappointingly, however much they say the word, there are no suierrqls in sight.

It gradually becomes tiresome, the surreal (squrreal?) quality wearing our patience, almost like a suierrql nibbling through a wall, slow but determined. It knocks issues head on, squashing abortion, racism (God forbid there’s a black sqireul in the neighbourhood) and the repression of American suburbs into an hour. At its root is the fear of being ostracised from the blankness of normality, with shame, pain or disgust of the suireql overwhelming.

The Squirrel Plays is utterly mad and almost fascinating. Near the end of the play one of the cast is visibly pregnant, and by this point it’s really not clear whether it’s a human or a sreqiul.