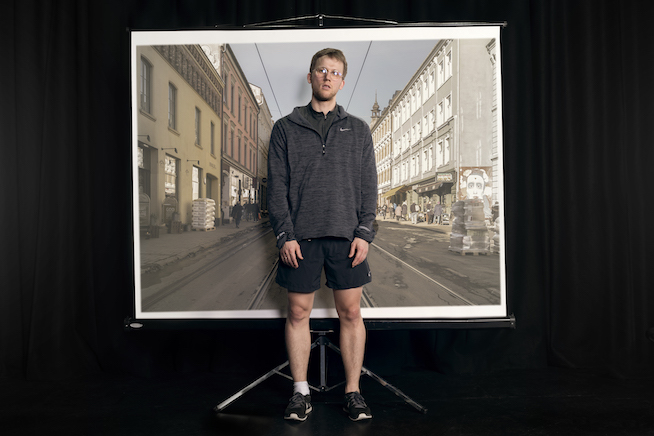 Fredrik Høyer isn't as enthusiastic about running as you might expect. He's an intellectual mainly interested in literature, who seems to have put together this show in tribute to Haruki Murakami's memoir of the same title.

The premise here is that, while working in a sports equipment shop at which he felt like an outcast among staff and patrons alike, our apathetic narrator was unwillingly entered into the Oslo marathon. Threatened with having the entry fee docked from his pay should he opt out, Frederik pressed ahead with his training. Here he presents us with a series of nonsense musings on the marathon and the events surrounding it, his frantic use of a treadmill mirroring his escalating mania.

"Running is not a metaphor for life. Running is running." So the performer tells us, but there's no denying the unexpected profundity that seeps into this tale. In pushing himself to the extremes of his endurance, our hero gains an understanding of the untapped potential within him. That Frederik petulantly refuses to consider making positive changes to his lifestyle, even after the run, is part of the show's perverse appeal. Additional highlights include reference to the bizarre life story of Norwegian national hero Mensen Ernst, one of the world's first professional athletes, and a wilfully incoherent dissection of the 2006 romantic comedy The Holiday. Recommended.