Review: You Remind Me of You by Arkle Theatre Company

Bittersweet drama that tugs the heartstrings where it counts 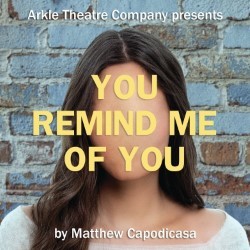 You Remind Me of You

Hannah Bradley rises to the challenge of directing a show that places romantic comedy alongside a tale of neurological disease. Adele (Kerri Clarence) meets musician Vincent (Jamie Stewart) who suffers from "face blindness" – despite the spark between them, he can't recognise her in a crowd. It's a fun premise, and the two bounce off one another with a sparkling chemistry that genuinely feels earned.

It's the cultivation of relationships that Bradley can be proudest of. The show's a four-hander, including Adele's childhood friend Franny (Hannah Fitzpatrick) and father Nathaniel (Cameron Orr) whose recent accident has resulted in a form of dementia. The show is heavy when it needs to be, laying on the emotional weight (Orr in particular) without feeling out of touch with Clarence and Stewart's far gentler romantic sequences. Fitzpatrick in particular is a breath of fresh air as the comic relief, waving conviviality into a scene as easily as she waves an arm.

Clarence does most of the emotional leg-work in the show, Adele juggling her father's deteriorating health and her blossoming relationship with Vincent. She's the character required to hit the heights of anger, sadness and silliness — and Clarence almost always steps up to the mark here. Occasionally her anger feels only lukewarm, as if she works better in quiet moments: her resigned nature with Nathaniel is heartbreaking and a real sign of an actor who really understands her character.

This carefully handled drama shows how to do a long show properly: the slow burn of action means we're entirely embedded into the lives of the characters, making a final reunion all the sweeter.