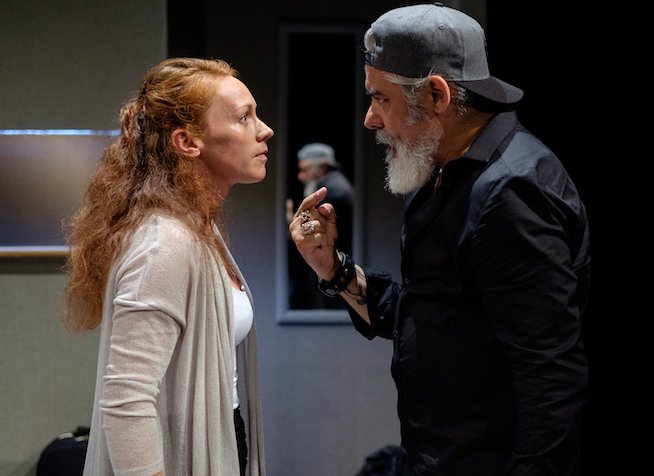 Chris Thorpe wants to rid himself of Britishness. Waking up the morning after the Brexit vote, watching a nation he half despises commit an act of senseless self-destruction, he opts to opt out: “I want to get out of it, and I want it to get out of me.”

Status (4 stars) is a personal interrogation of national identity – how those two things intersect and whether they are in any way separable. Alone onstage, electric guitar hanging from his neck, Thorpe recounts a semi-fictional, sometimes surreal, quest to escape his country of origin.

Picking at that Theresa May soundbite—“If you believe you’re a citizen of the world, you’re a citizen of nowhere”—Status goes globehopping; the theatrical equivalent of travelling to find yourself (or leave yourself behind). Postcards flash up in projections (Andrzej Goulding) that chart the changing landscape from towering cityscapes to flat expanses; developed nations and destroyed lands.

There is, Thorpe knows well, a privilege in each of his twin purple passports. In a shitty Serbian bar, standing up to local police, Britishness gets him out of a sticky situation: a gun held to his head. It sits on the “white ghost of a dead empire”. He knows others, dying between borders, aren’t so fortunate.

Thorpe deftly sews theory into his yarn: a Navajo tour guide’s dismissal of land division in Monument Valley (even while warning against littering "my land") or a stateless Singaporean who officially renounced his American citizenship. He skips from identikit airports to parties with global financiers. The story remains enthralling, sharply told and, as it slides into surrealism—a desert coyote embodies an East German escapee—Status becomes a spirit walk of sorts; an unravelling of self. Stripping one’s nationality seems a form of suicide and, as he cuts it out, Thorpe’s self-aware: this might merely be a mid-life crisis.

If so, fine. Against rising nationalism, this is vital: a scintillating, rigorous crtique of something we often take for granted. We are where we come from, but we must be more than that too.

Among other things, Ulster American frames a thorny question about offence – whether it’s culturally specific, universal, or simply the stuff of snowflakes. On the eve of rehearsals for Ruth’s new play, director Leigh is prepping his above-the-title, off-the-leash star Jay Conway in private. He’s a maelstorm of a man: a recovering alcoholic, dripping with arrogance, who calls himself a feminist (“How could I not?”) while wondering whether rape is ever morally justifiable. If forced, gun-against-the-head, nuclear-warhead-on-standby, he’d pick Princess Diana. Leigh, squirming and sychophantic, plonks for Margaret Thatcher.

It’s a tongue-in-cheek "joke" that both kickstarts the action and embodies the play. Rammed with violence, Ulster American doesn’t just ask what weight words carry in the real world, it puts that into practice: at once, completely unpalatable and outrageously funny. Flicking through Ruth’s script, Jay salivates: “Words. Words. Words. The truth. The truth. The truth.” The two are always entangled: Ruth’s fanciful play genuinely agitates for a divided Ireland.

Ireland’s own writing routinely pushes beyond the pale, and while Ulster American raises eyebrows aplenty, it does so with purpose – not just zapping an electric current through a farcical comedy of manners, but deploying intricate construction and thematic control. This is a play that references the Bechdel test, only to fail it spectacularly; that rolls its eyes at Quentin Tarantino’s gratuitous violence, then outdoes it with a Reservoir Dogs-style stand off over career-shattering tweets; that dangles the distinct possibility of sexual violence, before subverting it with a final sharpened stab of symbolism.

The Approach (4 stars) offers an alternative: a hymn to the ways women provide mutual support. Mark O’Rowe’s spare play is a triptych that loops back on itself: three conversations over coffee between three old friends grown apart. The first begins bitchily, Anna sniping to Cora about mutual acquaintances before discussing Anna’s decade-old dispute with her estranged sister Denise. When Denise catches up with Cora, the resentment seems as mutual as it does intractable, yet the third scene brings the two sisters back together.

It’s a still play, but one that runs deep. O’Rowe drip feeds us clues to the context behind the unlikely reunion. Cora’s the key – with a tragedy so understated it’s almost invisible. Never closer than in their “celibate phase”, the trio let men come between them without checking in or taking requisite care. Full of revealing patterns and low-key pain, The Approach shows how rifts harden with and get healed by time. It’s a plea for mutual, constant care – to listen before it’s too late.