Road Trippin' with Thorpe and Chavkin

A country buries itself inside a person. Chris Thorpe and Rachel Chavkin take a road trip to find out how it happens. 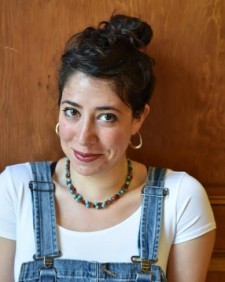 In the summer of 2016, writer and performer Chris Thorpe took a road trip across the western United States. At the same time, Britain and America were careening toward humongous political change. This became the formative DNA of Status, Thorpe's new show, created in partnershipwith American director Rachel Chavkin.

“Britain is having the conversation with itself about who we are and who we don’t want to be,” Thorpe says in a rehearsal break. With America in the midst of similar discussions, Chavkin explains that Status asks “how [people on] the left in particular relate to nationalism, and if there is a healthy way to be found.”

This duo are used to pulling things apart. Thorpe and Chavkin’s first show, the award-winning Confirmation, explored personal bias and the evidence we choose to back up our own beliefs. Their second in a planned trilogy, Status is a road trip investigating place and border. It is a magical realist exploration of how far a country roots itself inside of a person and how much damage it does to dig that country out.

Status was inspired by conversations from around the world, from those with a strong sense of nationhood to those without a nation. “We’re fundamentally shaped by the ideas we’re given of national identity,” says Thorpe. He spoke to people who had experienced a country’s reunification, those having to leave their homes because "those countries are falling apart” and others who were "radically against the idea of having countries”. Listing the scope of his interviewees, Thorpe pauses. “It’s interesting and fucked in a lot of ways.”

They are aware of their privilege in telling this story. “We’ve talked about this a lot,” Chavkin says. “You don’t get to choose whether you have that privilege or not, and it’s not something you can get rid of just because you’d like to think you personally treat all people the same.”

Since the last presidential election, Chavkin has been deeply engaged with anti-racism work, delving into the history of white supremacy and white privilege in America. This investigative rigour translates to the performance. Status is an "inner reflection about Chris as representing the dominant culture in Britain. It is wrestling through the discomforts of that on a very personal level.”

Thorpe takes grammatical leaps as he grapples with this. “The story is about a guy called Chris. It’s being told by me about him. But he can’t talk about himself in the first person because there is a kind of discomfort of admitting things that Chris thinks are my own.”

This internal argument might be familiar to the largely white liberal audience at the Fringe. Much like the pair’s first show, Status invites debate. “Confirmation at various points felt like quite a confrontational show,” Thorpe admits. “If [Status] feels challenging to any part of the audience—probably more to people most similar to me—it will do that in a different way. Anything destabilising sneaks in under the wire of song and story and landscape.”

With projections, animation and textural sound design, Chavkin manifests the locations Thorpe passes through, without being overly illustrative. “I don’t need to double what the storytelling is already doing. It’s about creating a vibe around that,” she says.

Like any good road trip, Status is based around its playlist. “Music can create space where the story can take on a more epic mode,” Chavkin enthuses, “and narrative gets to refract against larger ideas. Song space is a really special space.”

Both have form in using music this way. Chavkin’s work on musicals such as Anaïs Mitchell’s Hadestown used song to extend narrative. Thorpe, meanwhile, mashed together music with Tory budget speeches in noise project #Torycore, harnessing rage in a form of performance that echoed its emotion. In Status, Thorpe notes, there is a much closer relationship between the kind of music and the person who is telling the story. “They’re kind of a white British guy in his 40s with a guitar type of song, very deliberately. It comes back to that idea of having to accept and make useful your own identity and everything it entails.”

With a microphone, a guitar and a gut full of stories, Status presents a heady adventure that questions how far we can climb outside of ourselves. After a tricky discussion of allegiance, white privilege and language, Thorpe admits there’s another way of looking at it. “It’s just a story about an idiot going on a trip with some songs in it.”