The Soaking of Vera Shrimp

The salvation of raindrops 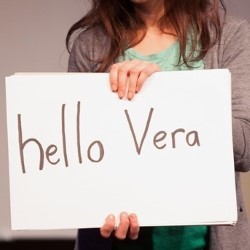 The Soaking of Vera Shrimp

This deserves to be said with emphasis: portraying a child—especially a child on the verge of adolescence—is extraordinarily difficult to pull off. So is cannot be overemphasised how wonderfully nuanced, authentic and touching Tessa Parr's performance is in this one-woman play's title role.

Vera Shrimp introduces herself via a class presentation, which slowly morphs into a more freeform monologue. She is bright, both in intelligence and demeanour, with a positivity that is less a natural state than a defence against the world, and a simmering nervousness that perfectly captures both her inner torments and the high school experience.

Vera has recently suffered tragedy. She also has a very special ability. One is relatable, the other is fantastical, and the narrative is spent exploring and explaining the link between the two. The play does not fully embrace its magical realism—doing so, one suspects, would be too easy—but it does toy with it, leaving the resultant drama fantastical at times, but free from any twee escapism that might undercut the emotional stakes.

The play's design shows similar creativity. The set will trigger nostalgia in anyone who has experienced school over the past three decades (I can't remember when I last saw an overhead projector), and achieves incredible beauty with modest means. The moment in which Vera recreates the effect of rain on a bus-stop using a watering can and an artist's mannequin must be seen, under the theatre's sharp, expressionist lighting, to be properly appreciated. The Soaking of Vera Shrimp is vivid, funny, heartwrenching and original.