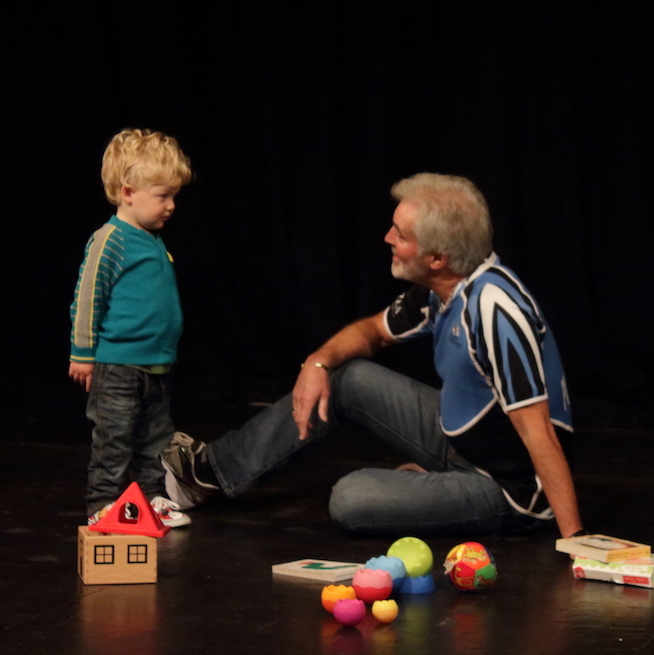 For all it tells stories, theatre’s rooted in real relationships. It’s part of the art. Casts can feel like families and audiences sense that. Some already are. Across Edinburgh, you’ll find relatives sharing a stage: a mother and a daughter; a happy couple; three grandfathers and their grandsons.

Nir Paldi and George Mann made a show to make a real-life decision – whether or not they ought to have children. Paldi’s always dreamed of a family, but Mann gave up on the idea upon realising he was gay. After 13 years together, with their party days over, they’ve settled and started to want something more. Would a child be a life change too far?

Dramatising their debate, No Kids (3 stars) constantly swings back and forth: broody one minute, resistant the next. Starting a family is a big leap in the dark, a decision that deals entirely in unknowns. But theatre can help with hypotheticals. Onstage, the pair get to play at being parents, acting out a series of possible futures. In one, they raise a wunderkind who brings about world peace. Another sees their boy bullied on their behalf.

Making a show is a lot like raising a child – a collaborative process that requires compromise. As co-directors of Theatre Ad Infinitum, Paldi and Mann usually work alone, each directing a project in turn. Their tastes are too different; their methods at odds. Reflecting on their back-and-forth over having kids, No Kids becomes a battle. Mann proposes cheery comic skits about male pregnancy and teenage neurosis, while Paldi prefers to swerve from hard-edged texts to high camp.

The form’s smart: optimism jostles with darker doubts and parenting is seen as universal and queer. School meetings dissolve into drag routines. Lullabies knock into Kylie anthems. The show, like them, can’t seem to make up its mind. In the end, it has to: starting a family is a singular choice – yes or no, do or don’t. Compromise and collaboration simply can’t help.

That makes for a full-on 90 minutes—so fitful that it can feel grating and relentless—but No Kids does earn its decision in the end. Zipping from the personal to the political, it sometimes skips through huge subjects, but No Kids feels comprehensive. The ethics of surrogacy, carbon footprints and over-population muddle with the couples own hopes and fears – not least about replicating the mistakes made by their own dads. As Philip Larkin told us, parenting leaves scars.

Grandparents, perhaps, have the chance to make good. In Glas(s) Ensemble’s Old Boy (3 stars), three grandfathers share a stage with their grandsons – one a toddler, one around 10, one fully-grown. Each admits to concocting excuses to drop by for a play. They coo, they fool around, they take taekwondo together – the sort of quality time that some fathers forget. Their own granddads taught them to fish and light fires. It’s as if, in old age, men rekindle a connection to the children they were.

Staged on a grassy dreamscape and set to traditional Scottish folk, Old Boy asks how each sees the other: what that generation gap feels like from either end. Grandfathers appear to be a source of wisdom, a wireless connection to the world as it was – to canings, Beatles concerts and backbreaking labour. Grandsons, in turn, key them into the present with smartphone instructionals and fidget spinner tricks. In them, you start to see time as an expanse; a long line of men teaching boys to be men. Old Boy celebrates that with a note of caution: beneath the tender connection, masculine stoicism keeps being passed down.

There’s a gorgeous, heartfelt simplicity to it all; the age gap’s impossibly poignant, the affection all too clear. But Old Boy is intent on tugging at heartstrings, and it skirts political hardballs of wealth inequality and aging populations under strain. It’s helluva sentimental, but this is a special relationship that embodies what Scottish singer-songwriter Matt McGinn calls “those little ticks of time”. They’re precious.

UNCONDITIONAL (3 star) sees mother-daughter relationships in the same way. When Josie Dale-Jones and her mum Stefanie Mueller, a theatremaker in her own right, set out to make a show together, they found the world changing beneath their feet: Brexit, Trump, #MeToo. Maternal love, by contrast, is constant.

In trying to find a story to sum it all up and sort it all out—a refugee’s journey and a feminist fairytale—they end up telling the story of a show gone wrong. A woman storms the stage to stand against queue-jumping blokes. A five year old pootles around, a pensioner passes away, a homeless man stops in for shelter. Under a leaking roof, the stage starts to flood.

A lot of artists I speak to feel stuck at the moment, unsure what to make in a world full of woes. UNCONDITIONAL catches that sense of stalling and suggests, subtly, that the answer is to simply give space. As mother and daughter watch on from the wings, the unfolding events stand in for their show – a show that might actually do some good.

For all its glinting surrealism, it’s a disjointed piece, never quite marrying maternal love with its thesis on theatre, but UNCONDITIONAL pushes for a new approach to art – an art rooted in reality that’s capable of real change.