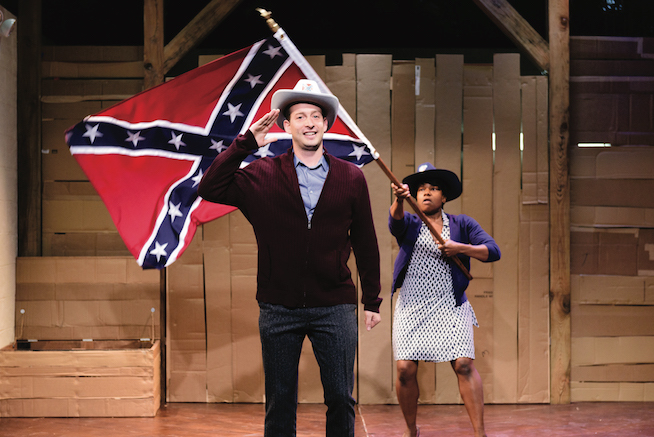 For some reason, America’s the focus of a lot of shows this year. It’s awful curious. Maybe it’s coincidence, maybe Americana’s just all the rage. OR MAYBE ITS BECAUSE THE WHOLE COUNTRY IS GOING TO HELL IN A HANDCART…

The United States isn’t exactly united right now – no thanks to the jaundiced jowlfest running the joint. The place is so riven with division, there’s crazy talk of a new civil war.

Underground Railroad Game (4 stars) looks back to the last one. Casting audiences as middle schoolers, it revolves around a (genuine) educational game that involves imparting the history of slavery by having students smuggle black dolls from classroom to classroom. “We learn about history by living history,” says an excitable Teacher Stuart. "Will you reaffirm or rewrite it?”

Jennifer Kidwell and Scott R. Sheppard argue, pretty convincingly, that we’re unwittingly reaffirming even as we profess to rewrite. Two teachers—one white man, one black woman—enact a serious of crass skits about a Quaker helping a plantation runaway across the Mason-Dixon line. It’s a narrative that throws focus on its white saviour and, 150 years on, the teachers’ own blossoming relationship, born of a flirtatious exchange of racist tropes, echoes that uncomfortable framing. “We’re moving history forwards,” Stuart tells his other half Caroline; she's outwardly smiling, but squirming inside.

Though it’s not helped by hype—the New York Times hailed it among the best 25 plays of the last 25 years—Underground Railroad Game offers an incisive look at persistent ingrained racism and its accompanying shame. With a sharp comedy that sticks its finger in raw wounds, it builds to a startling scene of self-flagellating sadomasochism.

Performed by Kidwell and Sheppard with their bodies on show, it’s a teasing piece that toys with the edges of reality and representation and, if the knowingly presentational style grates, it blurs the boundaries between the teachers’s school skits and their sex lives. The point—and its one woven through a tight Traverse programme—is that education, like art, has real-world effects.

America’s schools are anxious places. Martin Zimmerman’s On The Exhale (4 stars), written in the wake of the Sandy Hook shooting, follows a women’s studies teacher petrified that her campus could be hit at any time. Every knock on the door brings a flicker of fear. Every class has its “most likely candidate.” She worries anti-gun stickers designed as deterrents will act as a trigger.

It happens nearby—at her son’s primary school—blowing her life to bits. Desperate to understand his killer’s psychology, she turns to the shooting range and finds herself seduced. Zimmerman’s writing lingers on an assault rifle’s allure: the “obsidian stare” of its barrel, the adrenaline rush of kickback. With an NRA-supporting senator in her sights, will she take up arms in order to stop others doing the same? Does that make her another destructive deterrent?

With its thrillerish tone, On The Exhale establishes its inevitable course too soon, but a scrupulous, sometimes studied script keys into the white noise of grief. Polly Frame gives it both barrels as a woman breaking apart in a taut staging by Christopher Haydon, the director of Grounded – another monologue about a woman mesmerised by a violent machine. Frankie Bradshaw’s spare set forces her to tread carefully: its fragile fluorescent lights suggest a floor strewn with bodies, but also that the Stars and Stripes are falling apart.

Our Country (3 stars) reminds us why guns are so ingrained. Back in the Wild West—a land of sharp-shooting bandits and sharp-clawed wild bears—weaponry was once a vital way of life. In parts it still is and, like Underground Railroad Game, Annie Saunders and Becca Wolff’s off-beat verbatim pieces shows that the old ways stubbornly persist.

Saunders’ brother is a marijuana farmer out west, a place where people “have more guns than teeth”. Legalisation has triggered a “modern-day gold rush” that sits in a legal grey area overseen by corrupt cops. Beneath an outsized bedsheet fort—a childhood country of its own—she and actor Max Hersey don headphones to re-enact the siblings’ long, looping phone conversations about his troubles with the law.

It promises more than it can possibly deliver. The duo embody two sides of a split nation—coastal liberal and latterday outlaw—but Our Country becomes bogged down in personal history and strife. Fascinating as her brother is, with his authority issues and a longstanding death wish, he stands for neither an American culture, nor a Greek tragedy – no matter how often Saunders alludes to Antigone. If the show never entirely interrogates its veracity, Saunders slowly realises they’re two sides of the same coin and that life in America, with two tracks and no safety nets, can turn on a dime. Your fate comes down to the luck of the draw.