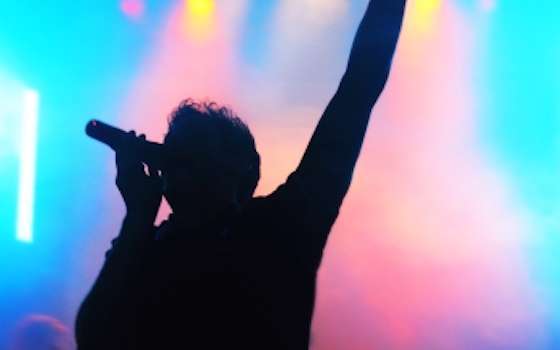 Terry's had a seriously bad week. This play/gig hybrid from Hull company Middle Child takes us from his night out high on Saturday on the city's indie rock scene to the Monday lows of getting fired from shelf stacking at Tesco in chilled out, guitar-toting style.

They're a five piece doing their best to channel The Strokes' swagger but landing on something a bit softer, with composer James Frewer's tracks swapping heavy bass and drumkit for breathy harmonies from the three female players. Marc Graham as Terry has a nasal music to his voice, too, crooning out poetry with self-deprecating charisma. Playwright Luke Barnes' text is agile and humane, adept at making Terry a lovable loser even at his lowest ebbs.

A screen behind him swims with atmospheric long shots: potato smilies on a tray, a mouldy stairwell, supermarket flowers on a suburban lawn. This doorstep reportage aesthetic particularly adds to its comic set pieces: Terry's trip to present his drug dealer with the remains of his cat, which he accidentally murdered, feels like a local news item gone hilariously wrong.

It's very much the Terry show, but his frontman act gets capable support from Jessica Morley, Princess Peach-perfect as his fed-up teenage girlfriend, and the rest of the company's smooth turns as bit parts, band and backing singers. The performance ends on a pill-popping message about oneness and friendship but this performance's biggest endorsement is for the sheer ecstatic power of a good night out. Well played.