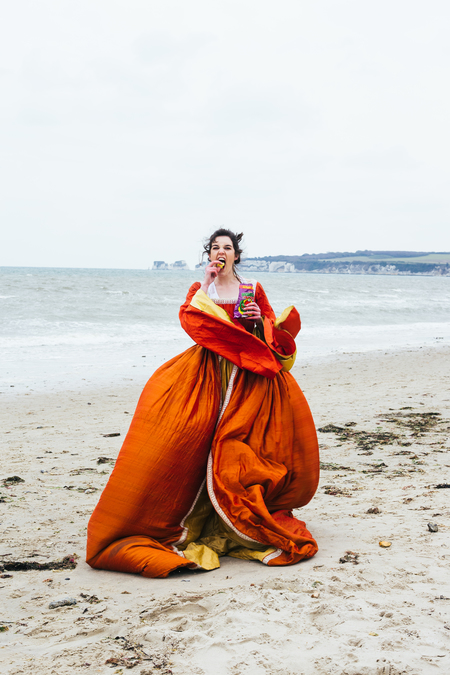 Wild Swimming tracks the feminist tide. Set on a Cornish beach, Marek Horn’s slip of a short play follows a male-female friendship through the ages. As history shimmies past Oscar and Nell, corsets giving way to cozzies, male privilege is eroded. Women start making waves of their own.

Starting in the late 1500s, Oscar’s the sort of undergrad who reckons the world and its women are waiting for him – determined to take a lucky dip in the Hellespont like the literary greats. “All great men swim now,” he flounces. Being female, Nell’s banned from the water. But as the centuries skip past, she finds her stroke and Oscar, in turn, starts to sulk.

You know the historic trajectory already—the great Victorian novelists and women that worked through the world wars—but Full Rogue’s debut sidesteps its slight lack of substance by piling on personality, and in spades.

Anachronisms do a lot of heavy lifting, from Zoe Brennan’s hooped skirt hooped earing combo to the swagger laced throughout Horn’s script (“Smash up some tunes on the lute!”). Julia Head’s staging can be way too eager to please with its sugary handouts and fizzy pop soundtrack.

But for all that, Wild Swimming is a bit of a blast. Alice Lamb and Annabel Baldwin ricochet round the room and the chemistry between them is right off the charts. Wild Swimming’s sparky, but it marks Full Rogue as ones to watch.